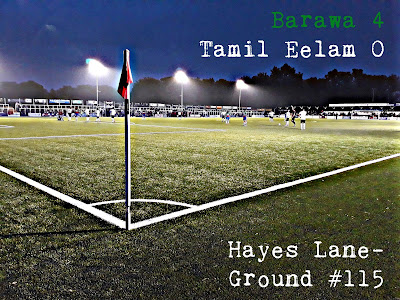 It's finally time for my first of many entries from this year's CONIFA World Cup, being hosted in London, and it's safe to say that I was absolutely thrilled to be able to make it down to Bromley for the biggest game of the opening day to see the hosts Barawa take on the Tamil Sri Lankan folk, aka Tamil Eelam. London was calling me and with Bromley's Hayes Lane being selected to host this match and indeed the opening ceremony, I had to make this my first stop in a week that will see me travel as far and wide across the capital as Aveley and Slough. Yup, Berkshire to Essex, the ultimate travellers expedition.


As some of you will know, my prep for London 2018 started a while ago as I got myself involved in designing the Wall Chart for the event, available for free download, and since then I have written a Tournament Preview to get myself and hopefully a couple of others in the mood. So bearing this in mind, you'd think I would be super prepared and I'd be getting down to Bromley from Staffordshire at a nice leisurely pace- WRONG! Just 24-hours before the start of the tournament I took my car in for a service, only to find out that my back wheel was loose. Five hours before kick-off I was sat in a pub in Stafford awaiting the call to find out whether my car would be driveable and when the phone eventually rang, I was on my way to beat the ultimate super-villain... time.

So with my chances of reaching the ground for the Opening Ceremony pretty much gone, I bundled my way down the M1, across the M25 and then through London to get to the South side, arriving at 7:40pm. My first impression of the area wasn't exactly the best, as I passed a lady verbally abusing a horse in an adjoining field. A nice start. Thankfully, I made it into Hayes Lane with enough time to visit the bar in advance and then I could finally relax as I watched the two sides take to the field for the national anthems. As the upbeat Barawa tune belted out from the speakers in the John Fiorini Stand, I soaked in the atmosphere and looked around at the great mixture of people inside the ground on this warm but muggy evening. With a fabulous array of Tamil Eelam fans waving flags and donning their national shirt, mixed with an excited group of Barawan supporters behind the goal, this only added to the large number of media representatives here, as well as a rich number of rival nations located in patches around the ground- and I even spotted a fair few people proudly representing the mighty Dulwich Hamlet, which overall made for a crowd of well over 600. The ground itself was a true classic and apart from the artificial pitch and the fairly modernised main stand, Hayes Lane looks as though it has remained largely untouched since its opening in 1938. Across from the John Fiorini was a delightful full-length standing terrace and both goals housed old-style hefty accommodation, with the goal to the right of the main stand also hosting a couple of rickety old benches, which always goes down well with Pint of Football.

As Mark Clattenburg started the proceedings on the pitch, I continued my tradition of jotting down a pre-match prediction- going for a 3-1 Barawa guess on this occasion. I didn't know too much about Tamil Eelam, but they are the ninth ranked CONIFA side according to the rankings and so I am sure they would be up for taking down the eleventh ranked hosts who started with Crawley Town midfielder Aryan Tajbbakhsh in their line-up. The opening ten minutes were entertaining despite offering little in the way of real chances, but it seemed clear that Barawa would be the side providing most of the attacking intent. Simon Noel was a big man with pace to burn up top and with St.Albans City winger Shaun Lucien popping up on both wings, it looked likely to be a well-balanced line-up from the side who's roots are based in the Lower Shebelle district of Somalia. It was Lucien who caused the first exasperation from the crowd as he went down in the box after a darting run, but as Clattenburg waved it away there were shouts from the stands for him to produce the first ever Green Card. For those unaware, it basically the same as a Red Card, but it allows the player to be replaced rather than just going a man down- it is to be used for diving and other unsportsmanlike behaviour.

After getting back to his feet, Lucien went close for the side playing in green, blue and red, but it would be Solomon Sambou, also of St.Albans, who gave the hosts their first goal of the tournament as he picked his spot and placed home, much to the delight of most in the ground. Barawa 1-0 Tamil. The game was well and truly alive now and just minutes later we would see Tamil Eelam have a couple of decent chances. First off Mahy Nambiar, who plies his trade in England's fourteenth division with MC United, twisted and turned his way through Barawa's defence before squandering his chance with a fairly tame strike. Following this, Canadian based Nirunthan Sivananthan, who is listed as a defender despite wearing the number 10 shirt and looking to be often the main attacking threat, went in on goal before applying a delicate chip which looped over Calvin King in the Barawa goal, hanging in the air for what seemed to be days and then ultimately hitting the crossbar. Unlucky.

Tamil continued to go close as an acrobatic improvised heel flick crashed into the side-netting, but the second goal came against the run of play. After a penalty was conceded from a Barawa lightning-fast break, Lucien stepped up to calmly double his side's lead on the half-hour mark and with that the pressure was on the South Asian contingency. Barawa 2-0 Tamil. The game seemed to have turned well in Barawa's favour by this point and as Tajbakhsh and Gianni Chrichlow both went close before half-time, a cruel third goal would be around the corner. Chrichlow was working his magic out on the right channel and as he put his head down to pick out a cross, his in-swinger swung past all of the on-looking players and found its way into the top corner of Umaesh Sundaralingam's goal. The FC Supernova keeper would have been gutted to see that one go in so close to the interval. Barawa 3-0 Tamil.

I spent the break continuing my walk around the ground and after being approached in the bar's queue I got chatting to a London lad who is from Cheshire, who had spotted my Macc Town scarf. Amongst many a highlight tonight, one of them was the friendly nature of the folk inside Hayes Lane and as well as having a good catch-up with Nathaniel (aka Terrace Traveller) I also got nattering with a Hampshire Groundhopper, a few Dagenham fans and a chap from Carlisle. I could have continued to trade tales, but of course we were all here for the game and so with my cup replenished I made my way back out to a now floodlit second-half. The majority of the remains were about Barawa's pursuit of a fourth goal and as Chrichlow went close yet again, you could feel Tamil's tiring bodies coming to the conclusion that the game was beyond them. The side playing in white shirts made a couple of subs in an attempt to freshen things up, but in truth their only real chance came in the 65th minute as a corner was well saved by King from close-range.

Ultimately Barawa had the stamina and attacking quality to carve their way through Tamil in the closing stages and as another pacey attack came forward a Tamil defender had to resort to conceding a second penalty of the game, which in my opinion should have seen the centre-back see red for his last-man take down. Needless to say it would be Lucien who slotted home his second spot-kick of the evening and that would be the end of the goals for the day here at Bromley. Barawa 4-0 Tamil. Across 90 minutes I'd say a 4-0 scoreline is a harsh one and Tamil Eelam certainly weren't pushovers, but equally I think you have to credit Barawa for a professional job well done. 3-0 at half-time was flattering, it could have been 2-1 on another day, but football can be a harsh mistress and that was certainly the case for these Sri Lankan exports. Tamil Eelam will now take on another tough test against my favourites for the tournament, Ellan Vannin, after Barawa have taken on Cascadia over at Carshalton Athletic's ground in what promises to be a good double-header for anyone who fancies it. For me, it'll be a super Saturday double with Tom (Partizan Bristle) as we watch the 2pm at the Queen Elizabeth II ground in Enfield, between Abkhazia vs Kárpátalja, before scooting down to Haringey Borough's ground for Padania versus Tuvalu- that one promises goals!

I didn't bother hanging around at the end for too long. A few stuck around to get a selfie with Clattenburg, whilst others tried to organise post-match interviews and other media type stuff, but I'd had a tremendously long day already and knowing that my temporary base in Southend was over an hour away I departed pretty swiftly. Don't worry though London, I'll be back tomorrow for more amazing CONIFA action.
Posted by Daz Knapton at 04:16