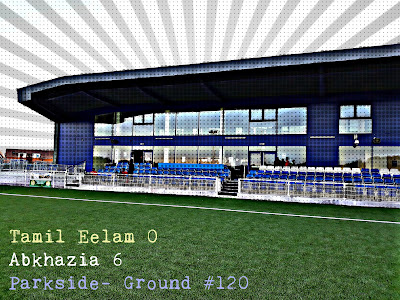 Part two of my lower bracket double-header would see me head to another one of the high-standard CONIFA facilities being used in the tournament as I made my debut to Parkside in Aveley, the location for my 120th ground. So far I'd managed to tick off five new grounds during the World Cup before this one and after making a revisit to Enfield Town's Queen Elizabeth II Stadium earlier in the afternoon, I just about made it to Parkside about five minutes late for the 6pm kick-off. Had the Matebeleland vs Kabylia match not gone to penalties I certainly would have made the ambitious trek across the M25 with time to spare, but thankfully I hadn't missed a goal when I arrived for Tamil Eelam's game against Abkhazia.

I described the setup at Arbour Park on Sunday as being like a "mini Fylde" and if this is the case, I suppose the inside of Aveley's Parkside ground is a bit of a mini Arbour Park. The ground has not even been open for 12 months yet and as you can see from the photos it is looking in pristine condition. With a huge clubhouse looking out on to the pitch, stocking an insane amount of choice in terms of beer, there is a main stand between the bar and the artificial pitch and to either side behind the goal you can see decent standing terraces. Across from the main stand is another impressive 200-seater to complete the 420 seat, 3,500 Capacity facility which lives just over the other side of the A13 to one of my favourite old grounds, Ship Lane in Thurrock. The ground itself may have been very impressive to look at but so far the two sides had not, with this Quarter-Final match kicking off their knockout run to try and fight for 9th place in the 16 team tournament. Abkhazia, the world champions and hosts of the last tournament, started off their campaign well with a 3-0 victory over Tibet, but after losing to Kárpátalya at my first outing to Enfield, they could then only clinch a draw against Northern Cyprus which was not enough to finish in the top two. Tamil Eelam are one of the only two teams who haven't managed a goal in the whole tournament and with defeats of 0-4, 0-2 and 0-6 against Barawa, Ellan Vannin and Cascadia respectively, I'd predicted them to continue their unwanted run and went for a 0-4 Abkhazia in this match.
When I saw Tamil Eelam lose 0-4 in their opener with Barawa I had been impressed with their first-half display and in tonight's outing the same was shaping up to be true. Within the first 20 minutes Janojan Pathmanathan went close from a silky break and Tamil certainly didn't look all that bad, but as time went on it seemed like only a matter of time before the deadline would be broken and Torpedo Moscow's Dmitrii Maskaev had a trio of chances in front of the flag wielding patrons just past the halfway line. Ruslan Akhvlediani would eventually be the man to score the opener just before half-time and his thumping finish bounced in off the underside of Umaesh Sundaralingam's bar. The Canadian-based shot-stopper could do little but run out and hope to get a finger on the striker's drive. Tamil 0-1 Abkhazia. The story of the half had been similar to Tamil's first game in that they'd played okay, tried to attack, but ultimately looked lacklustre whilst defending. The good teams will always ride out your attacks and punish at will, which is again what had happened so far- and there was much more to come!

The second-half for me was largely taken up by meeting and having a good chat with Sascha, the CONIFA General Secretary and Stadium Manager for the evening, as we discussed all things CONIFA. Needless to say that his flight over from Germany for the tournament was more than worthwhile as he was loving the success of the competition so far, as was I. On the pitch we had to wait until after the hour mark for a second goal and it was substitute Shabat Logua who struck, the number 9 had a simple job and he took it on with finesse. Tamil 0-2 Abkhazia. As we approached the final 15 minutes Akhvlediani would be given the chance to run in and seal the game with his second goal of the day, third of the World Cup, as he beat the on-rushing Eelam keeper to the ball and tapped it into an open net. Tamil 0-3 Abkhazia. Considering the game had been held to just a one goal difference before the 60th minute, Tamil had truly crumbled by now and although they didn't look like breaking their scoring drought, they almost certainly had a few more goals in the final 15 and this was started off by Ruslan Shoniya who followed Logua's lead in coming off the bench to grab himself a goal. Tamil 0-4 Abkhazia. The Abkhazian attack were making it look easy now and their competition had all but switched off completely, meaning that Astamur Tarba could tap in yet another simple finish. Tamil 0-5 Abkhazia. The rout was almost complete and with the Ref looking eagerly at his watch the 90th minute approached, but not before Shoniya could score his third goal of the tournament and finally end the relentless display with the sixth and final goal. Tamil 0-6 Abkhazia.

These results meant that the two sides would know their immediate destiny, with Tamil Eelam going into the Semi-Final for 13th-16th Places in a match that they'll hopefully use to turn their fortunes around against Tuvalu- I'll be at that match myself over at Gander Green Lane and I'll be interested to see what happens in the 12 noon kick-off at Sutton. Abkhazia's win will also give them a midday kick-off tomorrow and their will be at Bromley's Hayes Lane against the tough to beat United Koreans in Japan. My other three games aside from the Tamil vs Tuvalu one will be between Barawa and Panjab in the battle for 5th Place, before I take in both Semi-Finals for the Cup over at Carshalton. First up will be Northern Cyprus against Padania, followed up by a tasty all-Hungarian affair as Kárpátalya do battle with Székeley Land. There's bound to be at least a couple of classics in there as we await news of who will be at Saturday's Final at Enfield.
Posted by Daz Knapton at 13:33