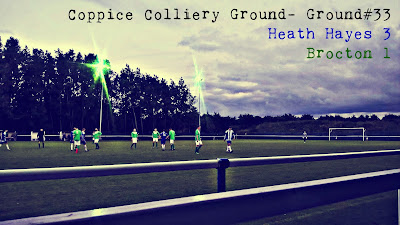 Hello and welcome to the 1st Birthday edition of Pint of Football, with this entry coming exactly one year and 4,000 views on from my first. That's right, on Tuesday 15th July at 7:45pm I was sat in Palmerston Park, Dumfries Scotland, ready to begin watching a pre-season friendly between Queen of the South and Kilmarnock. A great game that ended 2-2 started off my Blogging frenzy, which has since seen me visit Harrison Park (Leek Town), Norton Lane (Hengrove Athletic), The Frost Financial Stadium (Canvey Island) and many, many more!

On the anniversary of my first write-up, I absolutely had to get myself to a match- and I searched high and low to do so on this occasion! Back in mid-June I wrote down a few matches that I hoped to attend over the pre-season period and the one I'd originally earmarked for this fine summer's evening was Telford United vs Huddersfield. Unfortunately, this game didn't seem to be going ahead anymore, so on my lunch-break I frantically took to Twitter to find a match that I could get to within an hour of Stafford. After hitting up Brocton's page, I spotted that they had been mentioned by Midland League First Division side Heath Hayes as being their opponents for this evening. With no other information to go off (venue, kick-off time, price) I left Stafford at 6:45pm and hoped to arrive in time for 7:30pm. Gotta love the adventure!


Arriving in the Civil Parish just outside of Cannock Chase at 7:28pm, I promptly dumped my car roadside and paced down towards the big blue gate labelled "HHFC", where I was met by a friendly chap who sold me my ticket and a raffle ticket for the bargain price of £4. He obviously sensed my rush, and felt the need to clarify that kick-off wasn't actually until 7:45pm, which was music to my ears.
The Coppice had many of the features that I love about a proper non-league ground. With £2 cans of Carling on sale in the "Farm Office", a mishmash of different styled stands along one side of the ground and work site fencing surrounding the rest of it, this was undoubtedly as bric-a-brac a ground as I'd seen in a long while (perhaps ever!). At time of arrival roughly two dozen locals had populated the ground, with a seemingly relaxed atmosphere on display amongst the young, the old, the pie-eaters and the unused players. I used the few minutes leading to kick-off to grab myself a classic meat pie before seeking out a spot to take in the game from.


Having witnessed Brocton last season during a poor-run, I hadn't been too impressed with the Badgers display against a young Vale side. The Hayes, who were playing a division below that of their opponents, would no doubt look to get a positive result after an impressive 1-1 draw against Hednesford Town on Tuesday. All-in, I counted about 50 fans emerge from the woodwork at kick-off time and on que they were joined by the two teams. A muffled announcement appeared to announce the game as an "11-a-side match" as the Hayes and the Badgers stood ready to battle, and sure enough we were up and running.


Deep in this woodland surrounded area of Staffordshire, I was enjoying myself so far at the Coppice and it seemed like most of the fans were. With local clubs like Heath Hayes, it is always nice to earwig into some of the conversations going on in the background as pals meet up to watch the game, chill out and enjoy a bit of fresh air. One man was telling his friend about Sky are robbing the BBC of everything at the minute. His personal opinion was that it is Gary Linekar's fault and expects that Match of the Day will become a Sky-owned programme before long. Fair enough. On the pitch, Brocton had started in a dominant, albeit low-key, fashion and looked ready to cause the extra-large Heath Hayes keeper a few problems in the early proceedings. Without the cutting edge though, they could only work the ball into the wings unsuccessfully and fail to capitalise on some great bits of play from the Brocton number 6.


As the referee's watched turned to the ten-minute mark, a goal was upcoming. Having predicted a close 2-1 win for Brocton before the game, I was certainly expecting the Heath to give it a go. A solid counter-attack involving a Zlatan Ibrahimovic lookalike eventually led to an easy finish for the Heath and an early opener which was partially greeted by somewhat excitement from the locals. Hayes 1-0 Brocton. With the deadlock broken, the game quickly restarted and Brocton went in again with the assertive play witnessed prior to the goal. The Brocton number 9 seemed most likely to score and made some great runs through the centre, but often his finish didn't match the play and he squandered a couple of half-chances. At the other end, Hayes Heath could've doubled the lead but for a fine save from the opposing keeper, and Brocton seemed capable of leaking goals when the defence was tested. One moment of frustration that stuck in my mind was when a Brocton foul was called after an advantage was not deemed to be given. The keeper for Heath Hayes, ball in hand, walked out to the edge of his area and shouted out "Ref, how long you playing advantage for?" to which the ref replied with, "As long as I want!"- and that was that.


With half-time looming, I was beginning to wonder if Brocton would nick a goal with the pressure they'd put on HH. On 42 minutes, finally, the Badgers dug deep to grab a much needed equaliser. The aforementioned striker for Brocton rose above the defence to calmly steer home the goal from the winger who'd been pulling the strings. Hayes 1-1 Brocton. And with that, it was time for a break- half-time. After giving the ground a once over already, I decided to pop into the cabin to grab myself a chilled beverage and a bag of crisps. The queue was virtually non-existent and so I had time to mull over the events so far. I still fancied Brocton to grab a winner as they had the best of possession, but if the Heath were to breakaway on another sharp counter then you would fancy them to take the game.
The opening 15 minutes of the second-half was pretty relaxed, and by which I mean poor. So much so, that the fans around began to divert attention towards other things. Pokémon Go, in particular was on the mind of two lads, who appeared to be catching 'em all in an attempt to keep themselves entertained. Meanwhile over at the other end, a group of lads were stealing cigs from each other and running about with them. Thrilling stuff. As Brocton pushed into the final 30 minutes with an eye on the winner, the big man between the home sticks made a fine save to deny the Badgers from grabbing a second.
Wondering if the game would surge into life, my thoughts were finally realised in the 72nd minute. a Heath Hayes forward picked up the ball from a left-sided pass and from 18-yards he hit a supremely-placed striker into the back of the net to give the Hayes another goal on the counter. Hayes 2-1 Brocton. Brocton were down and out and despite efforts, again, to grab an equaliser for the second time, they instead fell foul to another cutting Heath Hayes counter. The number 15 for the Heath found himself unmarked and in a position to take advantage of the slack Brocton defending. A good finish was still required and that's exactly what was provided. Hayes 3-1 Brocton. With life all of a sudden injected into the game, Brocton almost conceded a fourth before eventually finding the net themselves. Unfortunately for the Badgers, this effort was correctly ruled offside and did not count. The player questioned the linesman's decision, and to follow-up on the ref's mouthy answer from the first-half, he told the striker "of course you were offside, you're behind the keeper!"
The game fizzled out to it's end and the ref called time. A decent, but not electrifying, game that Heath Hayes undoubtedly won on merit. Brocton on a good day would've hoped to be more lethal in-front of goal and were probably left envying the home-side's striking efficiency. It was a game where chances weren't exactly on tap, so the difference this evening was that one side took them, and the other didn't. On my exit from the ground, I overheard one Hayes player shouting to his teammates to ask who fancied a celebratory hot dog. Ahh, the food of winners.

On the whole Coppice Colliery Ground was, to the Old Trafford hipster or an Emirates snob, a jumble sale of a ground. To me, however, it was a result of hard-work and perhaps the odd car boot purchase. A ground that I'll certainly remember for years to come- even if not the game itself. As the subs took the nets down post-match, I exited to my car for the journey home. Goodbye Heath Hayes, and good luck for the season ahead.