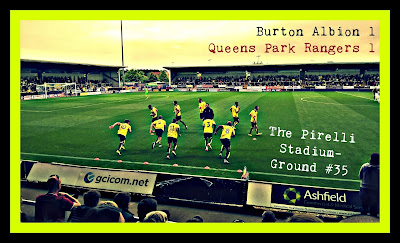 Tuesday evening has come around again, which meant another opportunity for Pint of Football to jump in the car and head off to tonight's location- Championship newcomers and rapid high-risers, Burton Albion. Not to be confused with the League match that these two sides will play against each other in two month's time, this was labelled as a friendly match and it would be to determine the holder of the 127 year old "Bass Charity Vase".


With a choice of visiting a new ground or heading to my local stomping ground, Moss Rose, I played it safe and left work in Stafford knowing that I'd easily have time to travel across Staffordshire to the mighty Burton-on-Trent. Making it with time to spare, I parked up on the side of the A5121 along with a few other fans, both home and away. As I walked to the stadium, I passed a lady with two children wearing QPR shirts and carrying lots of food underarm- talk about coolest Mum ever bringing the lads out to a fairly lengthy away day.


The Brewers had been enjoying a great pre-season so far, and their last game at home was an impressive 3-0 crushing of Stoke City. QPR had meanwhile been out on tour in Holland, before coming home and playing out draws with Northampton Town and Wycombe Wanderers. With strong line-ups likely to be named and new signings in the squads for this one, I had made one of my rare correct pre-match predictions and expected a 1-1 draw. After attempting to check out a packed Club Shop, I moved on to purchase my ticket and looked forward to taking my seat right by the touchlines.
With a mild downpour of rain briefly falling upon East Staffordshire, I headed straight into the ground's South West Snack Bar and thought I'd give the Carling a try, seems as how I was going to be taking a seat in the Carling Stand for this one.


I also purchased a programme beforehand, which is where I first came across the friendly-nature of folk that I would be enjoying the company of this evening. With a glowing smile, the young lad said to me "Programme is £1.50, or you can have one for free if you give me that pint!" to which I quickly passed him my money, grabbed a programme and slapped him on the head with it. A nice sight to see at a game, as opposed to the sometimes begrudging staff who are not exactly giving the customer service application to the job like this chap. Without delay in supping my pint, I was soon enough heading out to my seat and thankfully the rain had passed very very quickly. With a very nice seat, central and about half a dozen rows up from the front, I took my seat and pulled out my packed lunch box, just in time to enjoy a pre-match butty.


The two men to my left, who became more and more vocal throughout the evening, were quietly discussing the Brewers chances of their first ever season at this level. Considering they were a Conference side back in 2009, the side had certainly been enjoying great success in the new stadium, which they moved to from Eton Park back in 2005. With an eye for an upset and a tough manager in Nigel Clough, the chaps beside me were right to describe the yellows as being "just like Iceland, no premadonnas in our squad."


Having had a cheap pint and a friendly experience of the people so far, this was my kind of ground so far. This theme continued throughout, as the announcer got the ground clapping frantically as they were asked to welcome back former manager Jimmy Floyd Hasselbaink. The Dutchman must've been happy at the positive reception, considering he was pick-pocketed from the club last season and this was his first return to the ground since December. In a fairly odd contrast, I then lay my eyes upon the club mascot for Burton, who looked from afar like a man who had been beaten up. Very odd, I cannot imagine who would do this at such a nice ground!


Premier League referee Jon Moss stepped out to get the match started, and it was up and running at last. Burton Albion was actually the first team that I ever watched play football, and it was the game that made me fall in love with Macclesfield Town in a League Two fixture. The 2-1 win that day was a moment I'll never forget, and neither was the same fixture the season after, as it was the match that sent Macc out of the League in 2012. With one of my greatest footballing memories, and certainly my most upsetting, both coming in the two Burton games I'd seen so far, this game hadn't started in the most exciting of fashions. I'd seen Will Grigg fire blanks against Macc last Wednesday for Wigan, so tonight it was time to see if his fellow Northern Irelander, Conor Washington, could do any better for the Hoops. The main highlight from the opening 15 minutes was watching a very animated Jimmy Floyd trying to spark his team into life from the touchline. The standout player in the early proceedings was 23-year old new signing Jackson Irvine, who was sat in the heart of Burton's midfield and bossing it. My neighbour was chatting about him with his mate and I overheard him say, "he's played for some good clubs... Ross County!"


Another player who is well known for being a midfield general is QPR's Karl Henry, and the Stoke and Wolves man was certainly not treating this game as a friendly. With hard tackles, intimidation tactics and many fouls on display, he may have had to be reminded that no points were available in this one. Alas, it was his side that were being frustrated by the home side, and debutant Lloyd Dyer fired the first cannon on the 20th minute. His charge from left-back led to a self-made chance which was well met by Alex Smithies in the Hoops goal. Chances were few and far between, with the tension of two well-matched teams subduing the amount of shots created. And it was not until the 35th minute when a goal came. A corner was forged by QPR against the run of play, and with the target of Nedum Onuoha to aim for there was always a chance of problems for Burton in the box. Surely enough, Onuoha's header connected and it eventually bobbled in off an unfortunately placed defender for Burton, which silenced the crowd temporarily. Burton 0-1 QPR. Knowing that they didn't really deserve the lead, QPR ended the first-half stronger and almost doubled the lead at a crucial moment. Washington played a clever squared ball, which was shortly given back to him and he crashed his strike past the keeper and on to the crossbar.


I thought I'd check out the upstairs bar at the break, and in hindsight I am unsure as to whether I was actually allowed in there. Firstly, I entered the bar as the only person not suited up, but in my usual attire of shorts. Secondly, I seemed to be surrounded by people belonging to tables as though they were V.I.P's. Thirdly, I passed many of the stadium's private Boxes and a large table of what appeared to be free tea and biscuits. Either way, I had come this far unopposed and decided to queue at the bar anyway. Amongst a line of people trying to grab a beer, I decided to queue-up behind the man who was asking about wine and prosecco. Yup, 11 minutes into the 15 minute half-time I finally got served and was in a position where I had to quickly get my drink on.


Amazingly, I made it back to my seat after missing only 50 seconds. Luckily I didn't miss too much more because the second-half started fairly explosively. Having had the best shot of the first-half, it was again Lloyd Dyer who flew forward and made another chance for himself with a rippling shot. My mates to my left were enjoying his first run-out, and one of them actually gasped "cor blimey!" at his most recent hit. Jimmy Floyd was back out of his seat and giving personal trainer like calls to his players, trying once more to get his lads going against a pushy Burton eleven. On 55 minutes I finally caught a first glimpse of his opposite number, Clough, as he finally burst out on to the technical area to give somebody at the opposite side of the field a bollocking! Classic.


One minute later, and Burton had another chance. Stuart Beavon it was this time, as he ran into the box and after a bit of pinballing in the box around Chris O'Grady, the poacher stuck out a leg and got enough on his strike for it to head into the back of the net and level up the score. Burton 1-1 QPR. With a draw now on the cards, I began to wonder if the Vase would be split at the result of a draw, or if indeed the excitement of extra time or penalties could keep the evening swinging. On the hour-mark of the match, Hasselbaink decided to bring on about 46 substitutes, well that's how it looked anyway.


The good-guy nature of the announcer continued from earlier as he welcomed one departing QPR player off the pitch, who was also a former Brewer. The fans responded to this by singing out Jimmy Floyd Hasselbaink's name as a sign of appreciation to their former main man, and he reciprocated the gesture with a big wave and smile. A nice touch. Back on the pitch there was only one more noted chance, and it was for Burton again. Lee Williamson, another debutant, hit a half-volley from a good way out and Smithies could only dive alongside the ball is it only just zipped wide. Following more substitutions, some questionably unfriendly fouls and the odd half-chance, the whistle blew and the match was over. The announcer swiftly came on the mic to clarify the outcome of the Bass Charity Vase. He announced that there would be no more play for the evening and as the holders, Burton would remain the champions of the Vase. Despite the anti-climactic end, I remained to watch the Albion captain lift what looked like the world's heaviest trophy.


And that was that. Having expected and seen a tightly contested, fairly competitive game, I was off back to my car and of course ready to make the journey home again. After visiting Nantwich's Weaver Stadium on Saturday, I had now visited two new grounds within four days, and that is certainly enough for me for now! A great stadium is the Pirelli, but I shall no doubt be returning to the rustic roots of non-league shoddiness when I make a visit to a new ground on Thursday night. Where that will be, I don't know yet, but either way I hope you'll check it out.