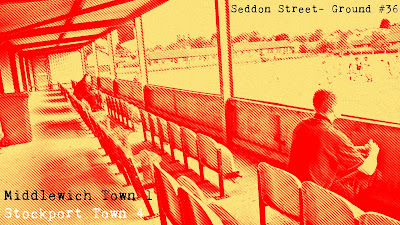 Goodness me, I could get used to having midweek evening's off. With my work schedule having me on day shifts over much of July and the some of August, I was able to head to my seventh friendly match in sixteen days of pre-season perfection. Tonight was a trip to Cheshire Football League One side Middlewich Town's friendly against Stockport Town.


Leaving Stafford at 5:45pm should have allowed for arrival at Seddon Street by around 6:30pm, but as we all know the M6 had it's own plans. With stop start traffic being reported around Keele and Sandbach, I decided to jump off the motorway at Stoke, jump back on after Keele, back off again at Sandbach and then head through the sleepy villages to hopefully avoid the delays. I'd like to think that this worked, as I only hit traffic for around 15 minutes and made it at the almighty close-shave time of 6:58pm- just in time for a 7pm kick-off!


After all the rush of parking up and rushing into the tiny little ground, I only realised when I made it to pitchside that I had not paid. Upon scouting around and assuming that the game's kick-off time had been pushed back, I found out that tonight's game was free entry- a Pint of Football first! After coughing up £15 to see Burton vs QPR on Tuesday, a free game was a sight for sore eyes and I was thrilled to be here and awaiting my first time watching a Level 12 side. Tonight they were facing a side from the league above, Stockport Town, and I think that the traffic may well have caused them to be late arriving at Seddon Street- either that, or the game was delayed whilst they waited for me to arrive.
The ground itself was easily the most basic I'd visited to date, taking the title firmly from Alsager Town's Wood Park Stadium which I visited last season in August. Despite this, I was still pleased to see the basic seated stand with over 50 spaces upon a raised deck overlooking the pitch. At the opposite side was a "bus shelter" style stand which housed three garden chairs, perhaps the Chairman's Suite? The pitch looked pretty well surfaced and it was surrounded by white posts with red bars connecting them. With on-site parking, I risked going for my initial wander in shorts and tee, knowing that my hoodie was only a few meters away should the Cheshire air turn a bit nippy.


Next stop was, surprise surprise, the bar. Having entered what seemed to be the back side of the ground I was under the initial impression that there was no bar- taking me back to the gutting feeling experienced at Brocton last year- but then when I furthered my quest down to the dressing room and toilet area, I found a group of lads sat on benches slurping a nice cold pint. Relief! I popped in to grab a quick one and discovered further relief or being able to take it out with me to the seating area in a plastic cup.


After a poor first effort by the bar staff to pour a Foster's into a plastic, I enjoyed a friendly chatter with her as she got it right second time round. I jokingly said to her that it was pre-season for the bar staff as much as it was for the players, a joke that went down adequately at best. By the time I headed back out it was 7:15pm and it was just about time for the game to get underway. The youthful Witches team headed out first and Stockport Town followed within a minute or so.


With the linos and ref joining the field finally it was time to get cracking, but not before one lad could shout out to the linesman "how long til half time?" to which the chap looked at his watch, smiled, and then shouted out "about 20 minutes." You could tell already that it was going to be a different type of night to Tuesday. I am always interested in how much, if anything, the players at this level get paid and whether it is still classed as part-time football or just a bridge between semi-pro and pub football. Apparently I wasn't the only one thinking this, as one lad said to his mate "how much is he on?", which was met by a potentially truthful response of "about 4 quid a week".


Having played for a pub team in Stoke called "Princess FC" a couple of years ago, I can sympathise with a group of guys who are following a side labelled as the Witches. On the pitch the game was afoot, and it was actually a decent start, with the underdogs taking the Lions by the scruff of the neck. Having predicted a 3-2 classic with Stockport going home winners, Middlewich looked decent to start with and in particular the left-winger seemed to be a pretty solid part of the home side. Within the first quarter of an hour, it was in fact he who opened the game's scoring. Finding time and space in the box, he coolly slotted home a fairly simple move from the home team to give them an early breakthrough. Middlewich 1-0 Stockport. The tone was set by this point and because the sleeping Lions hadn't woken up yet, Middlewich almost worked a bit of witchcraft in the box again to try to add a second. This time it wasn't to be.


The final let-off for Stockport early on was around the 23rd minute when Middlewich thought they'd scored again. The well curved set-piece from the reds was headed in, but the linesman's raised flag denied them what would prove to be a vital second goal. After this, Stockport came to life and started to forge a few chances themselves. As the Middlewich fan behind me asked around whether the game was a friendly, another young fan was shouting "2-0, 2-0" despite the second been given offside, and on the pitch Stockport almost grabbed an equaliser. The Lions' number 10 hit a good solid strike into the keeper's reach and he palmed it wide to make a nice save. Following this, the winger for Stockport then turned on the pace and glided past Middlewich's left-back, before squaring the ball to an onrushing striker for Stockport and inevitably a goal for the away side. Middlewich 1-1 Stockport. With no more goals to come in the opening half, the main action appeared to be for the fans who were acting as ball-boys. With balls being hit into every surrounding bush, chaos descended around Seddon Street as the ref spent half of his time signalling for another ball. Within these comedy scenes, two teenagers entered the stand and started chatting about the thrills of being a Middlewich loyal. The conclusion of this chat was when the lad nearest me said "that could be you in a couple of years" after seeing a home team's winger making some good moves on the right.


Half-time was a chance to grab another pint and pick up my hoodie from the car. It certainly wasn't cold, but it wasn't as warm as the Summer's evening matches I'd been used to last season. Still, it wasn't raining, which in England is always a bonus! Knowing that the game was running behind, the second 45 seemed to get going fairly quickly and the pace of the game matched it. Within a few minutes of the restart, a Stockport striker guided a header on to the bar and was denied a goal. The goal did come soon enough though, and it was a result of a corner. It was flown in from the right and misjudged by the stumbling keeper, which led to a scramble in the 6-yard box before eventually falling nicely for number 6 who popped it into the net. Middlewich 1-2 Stockport. With scrappy play and fouls aplenty unfolding, I could've quite easily been watching any proper non-league clash at this point. Stockport seemed to contain the quality to see out the win, and in fact they would go on to do more than that. With another unfortunate moment for the keeper, Stockport's right-back took a 30-yard potluck dig on 70 minutes that somehow ended up crawling in despite the keeper's efforts to keep it out. Middlewich 1-3 Stockport. The subs came on for the final 20 minutes, and a pocket-size winger wearing an oversized shirt almost gave the home side another chance to cheer when he won a penalty from a direct run into the box. Unfortunately, Middlewich's number 8 soared the effort well over and somebody instantly shouted out "Is that Raheem Stirling?", and that was that.


At 3-1 down, the Witches went forth once more and were able to add a final goal. The right-back who'd grabbed the long-range third was on hand this time from close range to finish off after yet another scramble in the box. He showed composure and a good touch to set himself up and slotted home yet again. Middlewich 1-4 Stockport. A couple more subs came on to complete the game, and even one sub who'd come off earlier popped back on as a striker. I haven't come across rolling subs since I played at Under 15 level!


Having seen it all in the past couple of weeks I know time is running out before I go back to evening shifts and the hunt for regular football becomes a struggle, so I know that I'll be doing all that I can to get a few more games in. Look out for my final handful of friendly games, and in the meantime cheers to Seddon Park for providing a bit of fun, a lot of scrap, a few goals and a couple of pints! Good night!
Posted by Daz Knapton at 15:56