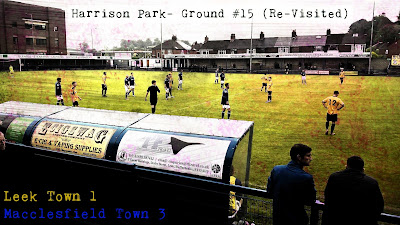 Saturday 16th July was the first day of my annual leave and it was without a doubt a day to relax, a day to make plans for my week off and maybe even a day to make an unexpected trip to Leek to see the Silkmen in action. The reason this trip was unexpected was because I had a call from my friend Will, who lives in East Yorkshire, at about 10:30am to say that he had drove to Buxton and was en-route to Harrison Park to see the match. When asked if I fancied accompanying him, I simply couldn't refuse.
With a 2pm kick-off in store for my first outing to Harrison Park since I watched them thrash Daventry Town 5-1 back in October last season, in a trip that featured a brief encounter with Eric Bristow, I must admit that I was looking forward to another chance to see my beloved Macclesfield Town. After a good natter with Will, we arrived at Harrison Park in good time for a pint and headed straight into the clubhouse. Upon entry, we were approached by a Macc fan who asked us why we hadn't purchased our new Silkmen tops yet. Another fan then joked with him saying that he shouldn't have bothered wearing it today, noting that Leek Town also play in blue and therefore assuming we'd be in our white away strip. More on this soon enough.


With prior knowledge of this ground, I made a beeline for the Wright's Pies counter and helped myself to a Meat and Potato, a true bonus of any Stoke-surrounded football ground. We then took up a place indoors as the light rain drizzled down. The friendly barman served us, joking that prices were double for Macc fans. Venturing slightly off-topic, I must remember at some point to write a separate Blog entry based on the qwerky and friendly bar staff I've encountered on my travels. The chap at The Lawns, Cribbs is amongst some of the places where the pint poured is as memorable as the match it accompanied. The legend running this aft's bar had not only provided a good chat about Leek's 0-2 defeat against Burton Albion and told us about the struggles of being a non-league club in a small town, but he'd also refilled Will's pint for free for him after he spilt all over the place.
Foolish pint-spilling antics aside, we drank up and headed out to pitch-side so that I could at least pretend that the wet patch was caused by the weather. With the team-sheets ready, we looked and saw a few new names for Macc. New lad Kingsley James, who featured for Halifax Town in the non-league finals day at Wembley, was one of two that I couldn't wait to see. The other, returning to the club for much anticipated second spell, was Jack Mackreth. I was hoping to see a win and a clean sheet for the Silkmen, and so had predicted a 2-0 win and hopefully a goal for Jack Mack to round off a good afternoon.


I must now reverse back to early on when I'd mentioned the joke about the old guy wearing his new blue kit. The significance of this is that when the teams came out, Macc were in fact dressed in a blue and white strip, and for some reason the home side had to make do with playing in a gold and black outfit. I'm assuming that this was not a usual playing colour for Leek Town, aka THE BLUES, as the loudspeaker announcer spoke out, "for anyone who hasn't seen us play in yellow and black before, we are in those colours." This wasn't the first time this week that the announcer had raised a laugh amongst fans, with a Heath Hayes announcer on Thursday clarifying that the match was 11-a-side. I know.
Joking aside, the game kicked-off and we took a standing spot near half-way, next to a gent from Chesterfield. Being the chatty folk that we are, we got talking to him and it turned out that his son, Ryan Duffy-McGuire, was on trial with Leek and was starting on the bench. I spent a few minutes telling him that Leek Town was a nice little club, which it is, and then we moved on to another topic. Macc's top-scorer from last season and one of my all time Silkmen favourites, Kristian Dennis, made the big jump up to League One and with Chesterfield nonetheless. He was quizzing us all about him and after talking him up to the Spireites season ticket holder, we closed the conversation by stating that if he flops in the height of Football League, I'm sure most Macc fans would have him back in an instant. Amongst all the chatting, we had not been distracted from the action on the pitch and Macc were playing pretty well so far. Trialist Ollie Norburn was pulling the strings and we didn't have to wait too long for the opening goal. Jack Mackreth made the goal from the left-wing as he played a simple ball into the box which was calmly met by the onrushing Danny Whitaker. Leek 0-1 Macc. The Chesterfield fan turned to us shortly after and said that had he not had prior knowledge, he'd have thought that Macc were the Championship side and not Tuesday's opponents. I'm sure Burton probably weren't playing a full starting XI, but when you're a Macc fan you take the compliments from anywhere. It was true to say that we looked classy so far though, and before the half-hour mark the lead was doubled. With a cross this time from the right, Norburn made himself a bit of space and tucked in from the far post against a fairly stationary Leek Town defence. Leek 0-2 Macc. The second goal seemed to spring some action into the home side, and player/manager Ant Danylyk almost saw his side grab a goal on the stroke of half-time as the right-back surged into the box and almost forged a chance for the Leek striker. As it was though, Macc would go into the break with a comfortable lead, one which Sutherland almost extended when he clipped the ball on to the bar from 25-yards. Perhaps it was time for a couple more trialists to get a run out before the big game on Wednesday against Wigan?


Half-time was spent in a fairly busy clubhouse where I overheard 3 older gents discussing the premise of Pokemon Go. I suspect that they weren't too impressed, as they walked back out to pitch side soon after concluding the chat. We weren't in a rush to get back out there, the rain was still fluttering down and the prospect of a much changed side in the second-half would surely make the game's tempo die down after a solid first 45. Alas, we headed back out having missed the first 5 minutes of the second-half, and we were just in time for the third goal of the afternoon. Jack Sampson picked up the ball on the halfway line and ran almost unopposed into the Leek territory. He feigned a pass out-wide, before turning on to his left-boot and unleashing a solid 20-yard finish. It took a deflection off the defender, but it was a nice hit either way. Leek 0-3 Macc. Leek's player/manager decided that enough was enough, and brought himself into the fold to see if he could inject a bit more positive play into his side. Just before the hour, his side did get a chance handed to them as the referee deemed Dan Cowan to have shirt-tugged the Leek forward. Danylyk wasn't willing to take any chances and stepped up himself to send the keeper the wrong way and grab his team a goal. Leek 1-3 Macc.


With the game won for Macc, the subs began to flood from the bench and both sides gave a chance to trialists a plenty. There wasn't much else of note in the game aside from scouting of potential new players for John Askey, who even gave First-team Coach Byron Jenkins, yup, a run out for the final 10 minutes. With time running out for Leek and half of the coaching staff on the field, Leek's keeper gave a final shout out to the lads as he aggressively asked them, "are you lot gonna win an 'eader!?" which inevitably just brought about mockery from the away fans. Despite the keepers roar, there were to be no more goals and Macc took the victory this aft. With a great first-half and a more even second, filled with stoppages for trialists entering, it was a good look at the Silkmen and I'm sure that in spells the Leek fans won't have been too disappointed in what they saw. As we left, we said good bye to the Chesterfield fan and he informed us that his mate just texted him to say that Dennis had missed a sitter against Sheff Wednesday. Hopefully not a sign of things to come for the man who had a top season in 2015/16.
Posted by Daz Knapton at 10:06