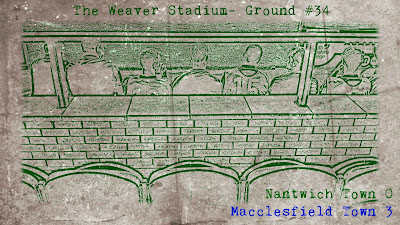 Another day and another away day as my annual leave from work came to a close, which meant that I had time for a third match in a week watching the Silkmen's pre-season adventures that had so far taken me to a victory over Leek Town at Harrison Park, before a mid-week visit to Moss Rose to see a far from boring 0-0 draw against a strong Wigan Athletic side. Between that visit and my trip to the Weaver Stadium, I had been to Flamborough Head and Harrogate to visit family- and unfortunately not to visit more grounds!

Waking up in Harrogate, I began my two hour journey to Nantwich on what for many was the first day of the Summer Holidays. Luckily, my journey was fine and I made it to the out-of-town ground by about half past 1. My friend Will, who had travelled from Flamborough, was not as lucky and managed to hit every bit of traffic possible. His supposed 3 hour journey took just under 5, meaning he arrived with minutes to spare before the game- no pre-match pint for him!


The £4m Weaver Stadium, constructed in 2007, is a top notch ground that still looks in pristine condition. With the 300 seater Baker Wynne and Wilson Stand being the main area for fans, which faces opposite the Whitby Morrison Stand that is for standing fans. As the clubhouse was in the seated stand, that was my preferred placement for the afternoon and upon entry that was my first pit-stop. Before entering, I had a peek into the club shop to see if there was any cheap merch I could grab a hold of. I swiftly asked the shop assistant if they sold scarves, to which she replied "Yes, of course. In winter!" Makes sense.


And with that, I picked up a programme and had a read with a pint. Amongst the misspelling of names of Macc players and even the odd mention of departed players, there was some good reading material in there too.


The Silkmen had beaten Leek Town 3-1, drew 0-0 with the Latics and lost 0-2 at Buxton so far, whereas Evo-Stik Premier side Nantwich Town had some tough games so far. A couple of decent draws, 0-0 with Curzon Ashton and 3-3 with AFC Fylde, came for the Dabbers before a 0-4 defeat at the hands of Crewe Alex earlier in the week. With a fairly rotated eleven picked for Macc, this was a chance for a couple of trial players to show their worth to Askey. Number 16 for the Silkmen was Canadian winger Emmett O'Connor and a couple more non-contract players were starting too as some of the usual faces were given a rest. Newly appointed captain Andy Halls was moved from right-back into the heart of the midfield too as the teams prepared to take to the field.


I had experienced some odd announcer howlers so far this season and today's was equally as humorous. After announcing David Fitzpatrick, twice, as "David F F Patrick" and Kingsley James as James Kingsley, giggles were spread across the Macclesfield bench as other names were misread. With smiles all-round, the referee got the match going and the Dabbers seemed decently organised and in a position to be able to give the Silkmen a good game. The chances weren't exactly coming thick and fast, and the trialist playing up front for Macc seemed to be struggling to find his feet. I didn't quite catch the lad's name, but against Leek and Wigan he'd come off the bench and looked pacey but lacking in other qualities. From the start of this game, he was hoping to prove his worth as the most attacking player. With 20 minutes gone, Macc only had the one chance to take the lead- and they were unlucky not to take it. Chris Holroyd slotted a tight-angled shot past the keeper, only for it to hit the post and bounce directly into the floored keeper's grasp. A fair portion of the fans around me thought it had gone in, and we all looked around at each other wondering how it hadn't. The goalmouth action remained limited and Nantwich remained unable to test new Silkmen keeper Craig Ross, despite Josh Gordon's run through on goal which was met by the onrushing number 1.


The half-time beer was, for the second time in a row, a time to reflect on a goalless half of football as Will and I discussed our thoughts. We both agreed that more of our key first team players should be brought on to try and keep the momentum going and ensure that a poor display isn't endured this close to the start of the new season. Surely enough, Askey must've agreed as John McCombe and Kingsley James both entered the field. One trialist had made way, but the promising looking O'Connor had remained on for a second 45. The opening third of the second-half was more promising, Macc had pressed well and a goal seemed to be on the way. Surely enough, the goal came on the hour mark and it was a first for new boy Kingsley James, who slotted home a low-hit first-time drive from the 20-yard mark to wake the game up. Nantwich 0-1 Macc. And after an hour, that's exactly what happened. Nantwich brought on a few subs to try and reduce the amount of tired legs on the field. The young Silkmen centre-back playing alongside McCombe until this point, had moved over to right-back and he was tested much more by the Dabbers winger in the final 20. At the other end, a Sideshow Bob lookalike entered the fray in goal for Nantwich and he was on the pitch just in time to concede a supreme goal. O'Connor, who had played well so far, created a goal for himself which was nothing short of magic. His run was dazzling, he tricked and turned all in his path and then placed an audacious chip over the keeper's 'fro into the net. Nantwich 0-2 Macc. All 200 fans appreciated the goal, and none more so than an old fan sitting the row in front of us. He shouted to Askey, "you better sign him up!"


These thoughts will have been in the mind of everyone else soon after, as O'Connor doubled his luck. Nantwich overstretched themselves going forward and when the left-back slipped a pass into the path of the opposition striker, Sampson turned well and ran the ball into the danger zone before sliding in O'Connor. With the keeper rushing out to tighten up the angle, the winger danced past his outstretched glove before tapping in a goal that could well earn him a contract at Moss Rose this season. Nantwich 0-3 Macc. The second-half had been much better viewing and 3 goals in the last half an hour proved to be the difference for the Silkmen. We left the ground shortly after the whistle to head into Nantwich town in search of a beer garden on this scorching afternoon. The Weaver Stadium is surely one I'll visit again, as a real luxury ground to see.
Posted by Daz Knapton at 15:18