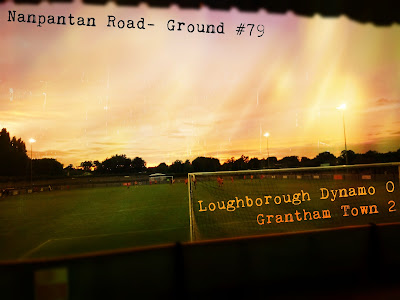 A very busy week for 'Pint of Football' was supposed to start on Monday night as I rushed home from work in order to get on down to Stone Dominoes vs Abbey Hulton, however my discovery of that match being cancelled left me downtrodden and full of indigestion until 24-hours later when I could make my way over to Loughborough to see the mighty Dynamo face the Gingerbreads in my final pre-season outing before the season begins on Friday with an FA Cup trip to Heanor Town.


Although I've never visited the South Kesteven Stadium, this would be my second time seeing Grantham Town- with the first time being just under a year ago as I saw them lose out to Rushall Olympic at Dales Lane. Knowing that they'd ended last season just 5 points outside of the Evo-Stik Premier Playoffs last season meant that I'd have to make them favourites for tonight against an opposition who finished just one place above the drop in the league below. I decided to go for 3-2 to the visitors in my pre-match prediction. Nantanpan Park itself is a quaint little ground just off the M1 and overall I couldn't pick out too many moans or groans with the Dynamo's home, but if I'm honest I had seen far superior grounds at this level and the likes of Harrison Park and Wincham Park stack-up pretty well in comparison. Despite this though, I was pleased to be in Loughborough to tick off my seventh ground from this division and it seemed like I wasn't the only one as many a Lincolnshire lad huddled around with a brew in one hand and hopes of a promotion push in the other. Of course my enjoyment of the away side is much deeper than my solo trip to see them last season as one of my good uni mates Jack grew up in Grantham and I've taken a vague interest in them since we became pals. I also can recall fond memories of a drunken me chatting with Adam Stevens and Danny Martin (the Manager and Assistant at the Gingerbreads) during Non-League Finals Day in 2016, so it was great to see them still at the club and continuing to build a good team ahead of their opener against Marine in just over a week's time.

Anyway, enough reminiscing, on with the footy. I quickly popped into the Clubhouse and grabbed myself a beer to nurse during the first 45, before taking a seat. Nantanpan Park is one of those outside-of-the-box kind of grounds that has its main stand behind the goal and although this is not my preferred location to view the beautiful game, I got down with the locals and tried my hardest to blend in with my bright orange Greuther Furth top on. In a rare moment of coincidence and slight lunacy, both sides emerged in orange kits for ready to start proceedings. As one fan shouted out "it's a bit of a bloody kit clash", the game got underway with the orange and black side kicking towards me and the mustardy orange home team kicking away. In fairness, as the match got going the kits weren't that much of a clash and Grantham Town certainly didn't look confused about who to pass to as they seized the early grasp on the game. With little over a minute played, the visitors won a corner and looked ready to open the scoring early. The ball was crossed in from my left and after two unmarked attackers missed attempts at a header, it would eventually fall to a third unmarked man in the form of Sam Purcicoe who had time to control the ball in the box and then hit home a 2nd minute goal for his side. Dynamo 0-1 Grantham. The following 20 minutes or so continued to prove to me why the Leicestershire side had managed to ship 94 goals last season in the league and they looked unable to defend any set-piece thrown into the mix.

The term "friendly" seems to be used loosely in some parts and tonight's game was no different. Dynamo in particular were keen to treat this game like there was points to be won and they set the tone with some pretty rash tackles. Josh Andrews and Ash Hodgkinson both gave the visiting strike-force a stud or two to think about and in the end the Ref had to put Hodgkinson in the book, dishing out a rare pre-season yellow card to the meaty defender. Purcicoe continued to look to add to his early opener my making himself known to his opponents from free-kicks and on a good day he could well have bagged a hat-trick within the opening 25 minutes after he mistimed one header and had the other blocked by a Dynamo defender. At the other end, Loughborough looked to counter whilst they settled into the game, and were it not for what looked like a DDT from a Grantham centre-back on an opposing striker they might have carved a chance of their own on the break.
As you can probably tell from my picture above, the grass on the Loughborough pitch was looking pretty darn immaculate ahead of the new season and I had to mention to a bystander that I was impressed with the surface. After the lass turned to me and asked if it was real, I politely smiled before she openly stated that the pitch back in Grantham looked nothing like that. Back to the action and Loughborough had their first proper shot of the match, with a snapshot out of nowhere registering the first intent from the hosts to get back in it. At the other end Kegan Everington hit one against the Dynamo crossbar and in the dying embers Lee Shaw was put through one-on-one but somehow looked bereaved of confidence and hit his close-range shot straight at Charlie Taylor, signalling half-time and time for a wander back into the Clubhouse.

As with any trip I make to grounds up and down the country, I like to point out the obscurities and laugh at the oddness surrounding me- and tonight was no different. After spending a good chunk of the break amongst the travelling fans, I decided to nip into the Gents toilet and a this point I was bet by a mahoosive boiler! Ironically, the tap next to the boiler had no hot water, so I thought it was safe to assume that this big boy just supplies the steam for the Loughborough Dynamo post-match Steam Room sessions!

I then continued to do the nerdy Groundhopper thing of walking around every inch of the ground to see what was going on; taking pictures of the corner flags, chatting to locals, sampling the beer and chips, and whilst on this journey I came across something that I have seen a million times but until now not really made a point of- that white garden chair that is at every ground! Nobody ever seems to be sitting on it, heck, it is mucky as hell and it lives as a rogue feature of the ground in a place that nobody ever sits, but it is always there! When I went to South Normanton, it was there. When I went to Eccleshall, it was there! Last season at Clapton, there was hundreds of the buggars and not one was being sat on. WHO ARE THEY EVEN FOR?

Okay, so just short of driving myself insane looking for chairs, I stopped my walk around the ground and headed back over to the seating ready for the second-half just in time as the players resumed their places on the field. Just under 100 or so were in attendance and although it had been a chatty crowd it wasn't exactly one that jumped up and down, so in the 50th minute when a toddler picked up the ball and waddled over to hand it to Kieran Preston we were treated to the largest applause of the night at what was a very cute moment indeed. A future ballboy in the making, no doubt! Meanwhile on the pitch itself there was little to excite, despite the hosts looking fairly confident on the ball- with some away supporters taking the time to discuss an apparent new roundabout in Mickleover. As thrilling as that was, I wanted another goal and in the 72nd minute I finally got what I wanted to satisfy me before my trip home to Stoke. George Couzens had made his way from the bench on to the field and he rewarded the manager's faith in him my slotting home the second goal to seal it for the Gingerbreads. Dynamo 0-2 Grantham.

This one was not the goal-fest I'd expected and it'll go down as the second lowest scoring match I'd visited in pre-season, after Macc Town's 1-0 win over Bury, but even so it was a perfectly good game. I think both sides will be satisfied enough with the outing and as this is the second to last friendly for the two clubs, they'll see it as another useful exercise in gaining match-sharpness. On a good day, I'd like to think that a more ruthless Grantham side could have run riot at times against a 50/50 Dynamo defence, but from the second-half showing it was one of those games that could've quite similarly ended all-square. After the Ref blew the for the final time, I departed Nanpantan Road and jumped back on the M1 briefly in my pursuit of home. All being well, I'll be hoping for a couple of FA Cup bouts this weekend to sandwich in a Stag Weekend that I'm attending for my good pal Sam. Friday should see me take a ride out to see Heanor Town take on Aylestone Park in Derbyshire before a Sunday afternoon trip to a place that claims to be the home to "the world's oldest ground", which of course means I'll be at Hallam to see them face North West Counties outfit Bootle. Should be a couple of crackers as the FA Cup gets going- see y'all there and best of luck to Dynamo and the Gingerbreads for the season ahead!
Posted by Daz Knapton at 22:32