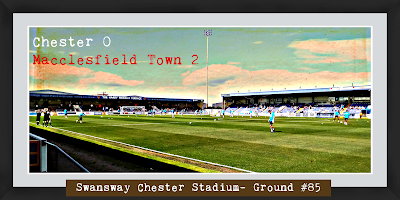 A Bank Holiday Monday afternoon jaunt to Chester is just what the doctor ordered in what would prove to be the first of two outings yesterday. Unlike everybody else on the planet who also seemed to be heading to Cheshire's county capital, I was not going for the zoo, the pleasant market-town vibes and delicious food, no no no, I am one of those weirdos who goes to some of the nicest places in the country to watch the football.

As a Macc Town fan, it is a crime against the footballing gods that I'd never been to this derby day fixture before, but thankfully I was finally checking-in to see what all the fuss was about at the Swansway Chester Stadium, as it is known these days, to see how my beloved Silkmen would get on in what would be the first competitive fixture I'd seen them play since that heart-breaking afternoon at Wembley back in May. A lot has changed since then, as I'd seen from trips to Moss Rose in pre-season and also to another away day at Stockport County, and there was a new-look team trying to gel together under John Askey as the 2017/18 season got off to an indifferent start for the Silkmen. Following a great opening win at Wrexham, Macc then drew two and lost two before picking up their second 1-0 win of the season on Friday against over Dover, leaving them with 8 points from 6. Chester on the other hand, who host three Silkmen players from last season in the shape of Andy Halls, John McCombe and Kingsley James, as well as the Macc Captain from the 2015/16 in Paul Turnbull, had drawn their first three league matches before a defeat and a victory before today's game- meaning that before play they were just two points behind their rivals.
I set off with plenty of time to allow for Bank Holiday traffic and it was a good job I did so! Almost an hour and a half it took me to get to the west of Chester from Stoke and I made it with just 20 minutes to spare. To save being held-up in horrendous post-match traffic, I parked up on the main road to the ground and joined many blue kitted fans, both from Chester and Macc, in heading down Bumper's Lane ready for kick-off. By the time I'd made the decision to go to the West Stand rather than behind the goal, it was time to take my seat and see the sides come out ready to do battle.
The Macc fans sat around me were in their usual mixed-bag format, with young, old, entranced and barely bothered folk all taking up their views on the game. One man, just 10 seconds in to the match, already felt the need to say "it's a game of two halves" and that signalled the first of his generic football phrases throughout the afternoon. My first observation on the pitch was that Ryan Astles was an absolute giant and the ex-Rhyl and Northwich Victoria defender looked set to take the far inferior frame of Tyrone Marsh to the cleaners in terms of physical battles. The 23-year old partnered ex-Macc player John McCombe in the heart of the Chester defence and although they had the height, they could do nothing about the pace of the Silkmen attackers running rings around them from the off. With just 7 minutes on the clock, a cross came in from the right and like an unmasked version of The Flash, Mitch Hancox darted into the box and got his glancing header towards and into the goal. Chester 0-1 Macc. Needless to say that this amazing start led to shots being fired from the away end at last season's Macc captain Andy Halls, who now dons the shirt of their rivals. "Hallsy, what's the score? Hallsy, Hallsy, what's the score?" was the preferred opening chant that the former Stockport right-back had to endure as his ex-employers looked to build on their opener. The game seemed to be flying-by as a Macc fan and in the 30th minute the lead could've been doubled as Gime Touré rose high above everyone in the box to head the ball just a mere whisker over the bar. Chester had a couple of long-range efforts themselves but with the Macc fan proclaimed Kingsley "Silkmen Reject" James looking their best player, they didn't seem likely to get back into it before the break.

As there wasn't much to see or do during the break, the joys of being an away fan, I sat back and soaked in the shade whilst looking over at the many Chester fans who would seemingly rather be in my shoes at this stage- both from over-exposure to the sun and also to the waves of Macclesfield Town attacks. With over 2,000 here for this derby match, I was eager to see the second-half get underway and see if we would kill the game off or let the blues back in. So far, Danny Whit, Tyrone Marsh and goalscorer Mitch Hancox had impressed me for Macc, as well as Elliott Durrell out on the right. Chester's side hadn't done much to inspire me and although I was impressed with the very familiar James, I couldn't help but feel the side's problem was due to a lack of passing and build-up play. Most of the time I'd seen Macc defending it was in the form of headed clearances and apart from the odd goal-kick, I don't think Shwan Jalal had touched the ball really.
The second 45 started poorly from the visitors and I feared for the first 15 minutes or so that Chester would get themselves back into contention. James ran in from the left and forced a decent stop from Jalal in what was Chester's biggest chance so far. At the other end, Gime Touré was having a woeful time of it and his self-frustration led to him lunging in on a Chester player and becoming the first player to enter Peter Wright's book. Chester's early efforts to get back into it had also led to man-mountain Astles leaving his defensive duties to go up-front and try to provide some added brute force in attack. This didn't shake Macc's focus though and with Durrell now pulling the strings out on the right the Silkmen fans were asking when, not if, the second goal would come. In the 62nd minute Durrell swung in a corner and Kieran Kennedy stuck his head on it to open his goal-scoring account with his new club. Chester 0-2 Macc. In truth, the floodgates could've opened at this point and Tyrone Marsh had a trio of chances towards the back end of the game. His third, a header from a Danny Whitaker cross, rattled the crossbar.

As with the start of the second-half, the end of it saw Chester doing their best to try and grab a goal of their own. In the dying embers, that man again Kingsley James found himself baring down on the Macc goal and were it not for an on-rushing Jalal and a backtracking defence it could've been a tense end to the game as the eventual shot was overstretched and looped over the bar. The final memorable moment of the afternoon was as Chester teenager Tom Crawford came on to make his senior debut for his hometown club- a lovely moment for the lad and the applause belted out around the ground as the lad entered the field for the final few minutes. The Ref blew the final whistle shortly after a final Chester attack in the Macc box and therefore secured a derby day defeat for Chester. I would have liked to have stuck around after the match to visit the clubhouse and shop, but as I had a second game to get to I jumped straight in my car and head on my way to Manchester in search of yet more football.
Posted by Daz Knapton at 03:57