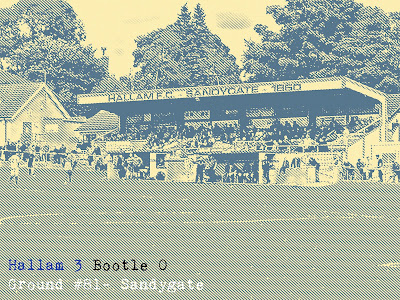 Today I experienced football in Sheffield for the first time and it certainly won't be the last. Yes that's right, I was in South Yorkshire to visit "the world's oldest ground" and it would be my second match of the season watching a match from one of the world's oldest competitions, The FA Cup. I have always had ambition to go to Sheffield for footy and of course I have had my eye on both Wednesday and United, as well as the original team, Sheffield FC. With this part of the country being famous for creating the beautiful game, I was very much looking forward to shaking off a stag-do hangover gained in Nottingham the night before and this was the perfect way to do it.

Whilst doing a bit of pre-match research earlier in the week, I came across some very interesting facts about Sandygate. In February 1867 the goodly folk of Sheffield clubbed together to create the first ever football tournament, the Youdan Cup, and it was quite the big deal about town. With Hallam claiming the trophy and the £2 prize money after beating Norfolk by two rouges to nil in a goalless game, they became the first ever champions of football. For those of you, like me, who are wondering what the blooming heck a rouge is, it is a separate score recorded when a shot is off target in terms of missing the 4 yards wide goal, but would have gone into a goal of 12 yards. I can't begin to fathom why they got rid of this very simple and not at all ludicrous rule!

I got to the ground just before the 3pm kick-off this afternoon and allowed myself a bit of time to wander around. Amongst the 300 or so here at Sandygate it seemed like a good chunk of them were in the bar, which was absolutely rammed. Thankfully my hankering for a beer wasn't that desperate today and so I gave the Clubhouse a miss and instead found myself a prime position in the main stand to view the game. The ground itself was very well kept and as you can see the picture it has had some vital reconstruction to keep it in good nick, but it also had some of the old features and there was a fair bit of memorabilia around the ground, which is very nice to see. Today's opponents from Merseyside are in the ninth tier of English football, which is one higher than the Northern Counties East Division One hosts, so therefore I based my pre-match prediction on this and predicted a 2-1 victory for Bootle. Nicknamed The Bucks, Bootle have only gone out of The FA Cup twice in the past ten years before today and on the other hand Hallam have not won a match in this competition since 2009- so surely the firm favourites would be Bootle!

The game started off in decent form, with Hallam looking the brighter of the two in the opening half an hour. Bootle's Michael Ordish had the first shot on target and even though it was an ambitious 30-yard strike, it was the first test for the Hallam shot-stopper Dave Darwent. At the other end, The Countrymen were pressing to open the scoring themselves and it would be the hosts who got the goal just before half-time. A well-worked corner was eventually crossed into the box, before a header was nodded back across goal to leave Roebuck with a simple finish. Hallam 1-0 Bootle. So with that exciting climax to the first 45, it was time to get a can of coke and see what was going on around the ground. I spent a good portion of the break listening to two Hallam fans talking about all things non-league. From the Northwich derby of yesterday to the politics of Clapton FC, it was interesting to hear genuine fans talking about something other than how Arsenal and Chelsea are getting on. As I mooched around I heard a couple of Merseyside veterans discussing a trip to Scarborough's new ground, a venture that I will also be aiming to make this season myself. Behind the goal at Sandygate I also spotted a few Ireland flags blowing in the wind and even a Sweden one- I'm not sure if these were left by far away visitors or locals, but I'd be interested to know if anybody has any info.

The second-half turned out to start off just as dramatically as the first had ended, and within a couple of minutes we were shouting as another goal went in. Sam Fewkes was presented the ball out wide on the right and as he hit an early cross towards goal he got more than he bargained for as his cross lobbed the Bootle keeper and went into the bottom corner of the net, bouncing through a hole in the netting and back out- confusing many a fan who delayed celebration until the Ref confirmed it had definitely gone in. Hallam 2-0 Bootle. With this crucial second goal going in, the game became much more end to end in the second-half and both sides had chances to score. The away side had another long-range drive that was saved with ease, whilst Hallam's number 11 attempted a diving-header to try and grab a third goal after a stunning cross from Simpson at right-back. With time now getting on, the Countrymen Captain hit a decent free-kick that was well saved and when Bootle were presented with a set-piece in the 80th minute they should have scored but Ant Rendell headed straight at the keeper on this occasion.


There was to be one more goal this afternoon and unfortunately for the travelling fans it would not be for their side. The number 12 for the home side had come off the bench and on the counter attack he worked himself a nice solo goal to end the match. Gibson ran in on goal in the 83rd minute and after skipping past a Bootle defender he hit a neat left-footed finish into the net and gained a rousing applause from the 310 in attendance. Hallam 3-0 Bootle. With the game all but over, the visitors rolled the dice and decided to throw their big centre-back up-front to make an attacking 3-4-3 formation, hoping to grab at least a goal to show for their efforts. Despite testing the keeper with a couple of shots, playing some good controlling footy and even winning an indirect free kick inside the box, the Bucks could not get a goal and when the whistle blew to end the match it was the home side that would enter the next round of the cup- just 13 wins away from the final at Wembley!


So with the game done and dusted I was on my merry way back to Stoke-on-Trent knowing that my long weekend was over. I'd started it off with FA Cup football in Heanor on Friday and it had ended with another successful outing to a wonderful and historic ground. My next match will be another FA Cup Qualifier, this time in the form of a Replay as I head to a very local ground to see Rocester against Sporting Bromsgrove.
Posted by Daz Knapton at 15:00