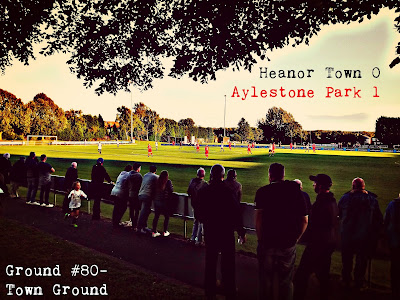 My second game this week would also prove to be my first competitive fixture of the 2017/18 season and it was another jolly jaunt to sunny Derbyshire to see what Heanor Town was all about. Just four months and a minimum of eight matches earlier than the likes of Chelsea, Manchester United and the rest of the big boys enter, early August proves to be the date of the first FA Cup ties for the clubs towards the bottom of the English pyramid and this Friday night fixture would see the visit of Leicestershire outfit Aylestone Park, who were making only their second ever appearance in one of the world's most famous cups.


This would be the second time that I myself entered the FA Cup at this round, having gone through to the Old Spotted Dog at Clapton this time last year for a derby match between them and London Bari. As you can probably guess by now, tonight's game was by no means a classic and will probably struggle to linger in my mind for too long as the season prolongs- but that doesn't mean to say that I wasn't pleased to be out in the sun for some non-league goodness at what would be my 80th ground to date. My journey from Stoke took roughly an hour tonight as I drove an almost identical route to the one that I'll also be making in the morning as I head to Nottingham for my mate's Stag Weekend- yup, I'm starting to become far too friendly with the old A50 these days. Having been down in Leicestershire on Tuesday night for a pre-season game between Loughborough Dynamo and Grantham Town, I had hoped for a better match tonight in terms of goal-scoring and with this being a highly-anticipated opening to the season for both sides, I predicted a 2-2 draw seems as I didn't know a heck of a lot about the sides playing.

With Heanor being placed slap-bang in the middle of Nottingham and Derby, it has a fair sprawling of fans from either side of the border and with both Forest and County beginning their Championship campaigns tonight too it seemed to bring plenty of folk out in full footballing spirit. From the moment I relinquished my 6 quid to enter the Town Ground, I got the feeling that I was at the home of a lovely little club. On the left as I entered was the pitch for the senior side, in front of me was a kids training session going on and over on the right was the Bar- which as a whole unit is also the host venue of Heanor Cricket Club. Additionally, there was a lot of greenery about and I think that all-in-all I was reminded of a community atmosphere similar to that of the place I grew up, Flamborough Head. I popped my head into the busy Clubhouse and helped myself to a pint from the bar, before heading back outside and towards pitch-side with little over 10 minutes to go until kick-off, and at this point I was approached by a chap in a Manchester City baseball cap who wished to question me about my football top of choice for the evening.

Although it is tough to make out in the above picture, I was wearing my CD Guadalajara football shirt that was released as a stand against homophobia back in 2015, which contains the rainbow coloured stripes. The middle-aged man stated that he did in fact like the top, before asking me if I knew that the coloured stripes represent. After I confirmed that I was aware of the clothing I was wearing, he simply smiled and walked away- and with that awkward interaction completed it was time for the match. Both sides entered the fray with a look of stern concentration upon their faces and as the ball was placed in the centre-circle I braced myself for the 90 minutes ahead. The Lions started off with a roar and put their travelling foes on the back-foot instantly with some assertive play and a couple of chances from set-pieces. One free-kick and three corners later and the game settled down a bit, which played into the hands of Aylestone. Marriott made the crucial error in the 6th minute as the right-back took a casual approach to using the ball inside the box. Ryan Foster saw his chance and nipped in to take the ball away from his opponent before the left-winger then lofted the ball over McCormack to give his side an unexpected early lead. Heanor 0-1 Aylestone.
As there had been an early goal, I was half-expecting goals galore by the end and with Heanor looking fairly dominant I still would have put money on them turning this around. Whilst Seaton was doing his best impressions of a Brazilian international with no-look passes and back-heeled shots, it was in fact Fyfe who looked to be the bright spark in my eyes. On 13 minutes Marriott looked to make amends for his error and after nutmegging the Park left-back he hit a cross into the box, only for Heanordinho to flick a half-chance wide. The game continued in a very similar format and with Brown testing the goalkeeping skills of Aylestone's giant number 1 there was still plenty of time for something more to happen in this match. At the other end Foster almost doubled his tally for the day as he this time cut into the centre of the pitch before hitting a right-footed drive which had to be denied by McCormack, who refused to be beaten again.

Just one more chance was to come through in the first-half and it would be from star man Fyfe again. From the middle of the pitch, he was passed the ball before successfully doing a Zidane turn around one defender, dinking the ball past another and then hitting the ball past Leicester's answer to Andre the Giant. Unfortunately for the winger his shot wasn't quite perfect and instead of finding the back of the net it hit the post and found its way back into the grateful arms of the floored keeper. At half-time I popped back over to the Clubhouse and caught up with the action from the big screen- Sunderland were holding Derby to a 1-1 draw, which is how things would finish-up there. I wasted no time in getting back out to the field here at Heanor and before I knew it we were up and running again- I was still confident at this point that we'd get plenty of goals!

Despite the chanting from the stand, the Lions could not get their pressure to pay as Aylestone absorbed all of the attack attempts of Heanor, showing sponge-like resilience without looking too stretched. With an hour gone the hosts won a free-kick in a good position, but Fyfe had an effort that I can only compare to one of those FIFA moments when you forget to let go of the shoot button as your effort embarrassingly balloons high, wide and not too handsomely into a tree. As time ran out I started to put things into perspective and I thought about how Heanor Town were looking like being one of the very first sides to be dumped out of the Cup this season- and to be honest they didn't look gritty enough to get the crucial goal. Pearce came on for the visiting side and he looked very agile as he looked to counter the Heanor attacks and stretch the defence. On one occasion he showed some good trickery and composure to win a corner despite being on the attack in a one-on-five situation. The fans had started to turn against the Ref too at this point and I tended to agree that he was often failing to hurry things along. One angered man in shorts shouted out "get out the way, twat!" at the man with the whistle as he took a ball to the stomach and therefore blocked an attacking move for the Lions. The 87th minute saw the final chance fall to the home side and it was a guilt-edge one- but as with the rest of the match the attacker wasn't up to the challenge and scooped his effort over the bar.

After a good 5 minutes of injury time, the Ref put the hosts out of their misery and called the end of the game. In my opinion, this game could have gone on for another 90 minutes and Aylestone would have held on to this one. They arrived with a plan, soaked up all of the Heanor pressure and took their one real chance to seal a big win and entry into the next preliminary round. Both sides will now look towards their respective League campaigns and hopefully for Heanor Town they will bounce back from a morale-damaging defeat which left everyone wondering what could have been on an evening of a more cutting-edge finish. The FA Cup weekend for me will continue on Sunday as I visit "the world's oldest ground" in the heart of Sheffield- Hallam vs Bootle is my venue of choice after tomorrow's madness in Nottingham. See you all on the other side!
Posted by Daz Knapton at 17:05