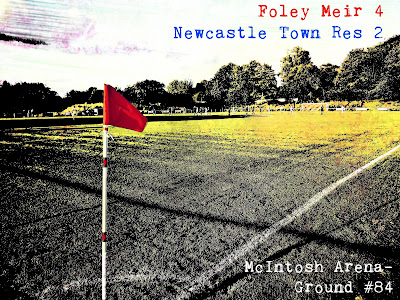 Last night I was given the option of two games- I could either go to The Bet 365 to see Stoke City take on Rochdale in the Carabao Cup, or I could head to a ground around the other corner for some Staffs Senior League action between Foley Meir and Newcastle Town's reserve side. On the plus side The Potters would provide me with high-quality football, a packed atmospheric stadium and the chance to revisit the Bet 365 for the first time in a good few years. However, I'm not the kind of mainstream guy who just hops along to Premier League grounds for the fun of it, so instead I headed over to Meir in the hope of seeing a goal-fest during this 6:30pm kick-off.

The Bet 365 Stadium and Meir's McIntosh Arena are both situated roughly 3-miles from my house in Dresden, so either way I was in for a much quicker trip home than that of my trip to Buxton last night- and hopefully there would be a better game too! I arrived at the ground with a good five minutes to spare after heading straight over from work and when I parked up pitch-side I jumped straight out of my car and into the action with the players coming out for the match. Before the start of the game, both sides had played four league games, gained six points and managed a plus-three goal difference so far and therefore I predicted a close encounter on the field. I guessed 3-3 on this occasion.

My first thoughts on the ground were that it was the most basic I'd come across so far, which I'd pretty much expected with it being on the seventh-tier of the non-league tree. With one green metal-roofed stand to my right and the club's infrastructure to the left, there really isn't that much to say about the ground itself. Most of the upkeep and running of the ground is done through hard-earned fundraisers in the community and since the 80's Foley have raised roughly £80k to turn what is essentially a bit of grass on the top of a hill into a haven of footballing goodness for the people of East Stoke which has seen some highlights such as lifting the Staffs Senior Division last season. It isn't all a bed of roses though, as I found out when stumbling around the ground amongst the unstable pitchside surface towards the stand. Whilst the match kicked-off, I continued to tread around in my new work shoes hoping not to take a tumble as I entered the stand. Once inside, I stood staring at the five seats in the main stand of this "football arena" wondering at what point a pitch is crowned a football ground. Is it at the point it has changing rooms and a bar? Is it at the point of having a stand? Or is it at the point that a team calls it home? Either way, I felt as though I was hovering somewhere over the border at the McIntosh. Out on the pitch, Foley had started the game well and pressed from the off, with two decent chances falling to them in succession around the 4th minute. First the number 9 hit a shot at the Castle keeper and then from the following corner the number 4 sprinted into the 6-yard box and volleyed wide in what will go down as a poor finish albeit from an awkward angle.

Castle's Reserve side, as you'd expect, was a young XI full of kids who were looking hungry to get their names known in Staffordshire's football scene and they showed early glimpses of class to the couple of dozen bystanders in attendance on this sunny evening. However, it was Foley Meir's right-winger who caught my eye as the star of the match- the number 7 looked very bright going forward and were it not for slightly mistimed crosses, he'd have undoubtedly got an early couple of assists as he aimed to pick out the big man up top for the hosts. Foley continued to attack and when the number 9 had the ball inside the opponent's box, he took a look up as he attempted a cheeky chip towards goal. The dink, which looked on target anyway, took a large deflection on its way into the air before looping over Castle's helpless keeper and into the net, therefore giving the hosts the lead with just over 25 minutes gone. Foley 1-0 Newcastle. At the side of the pitch there was little reaction to the goal, apart from one clear sign of joy from a man who let out a rippling fart before downing his tinnie in celebration of the opener- fair enough.

With the wind, no pun intended, now in the favour of the side in red they pushed forward in search of a second. The opening scorer looked dangerous every time he got the ball in the final third and the number 8 in the centre of midfield was making tricky runs through the middle of the young defending Newcastle Town lads. As is often the case in football though, it would be the struggling visitors who struck the next goal and against the run of play they made the most of Meir's failure to clear the ball when the number 4 whipped in a curling 25-yard shot that found its way into the top corner for Castle's equaliser. Foley 1-1 Newcastle. There was still 10 minutes left of the first-half and both sides certainly looked hopeful of grabbing another before half-time. Aside from Castle pressurising the Meir defence without getting shots away, the hosts created a couple of chances with fast-paced attacks and when the left-winger headed over it seemed likely we'd go in all square. Foley's number 8 had other plans though and took the game by the scruff of the neck just before the whistle- he carried the ball elegantly across the pitch like a Stokey Andres Iniesta and after showing the blue defenders his left-footed dribbling, he quickly swapped over to his right inside the box to prod home a very good goal. Foley 2-1 Newcastle.

Half-time was a chance for me to get into the clubhouse for a stern can of Carling and also to have a study of the varied memorabilia on display. With everything from a ADO Den Haag shirt wishing the club good luck, to a £700 cheque from Stoke City and even a crest on the wall from Northern Ireland's Cullybackey Blues, this really was a great way to pass my time. I also read about Foley's greatest years as they won the Longton and District Football League for 6 years on the spin in the early 1950's- an achievement that the likes of Barca and Bayern would struggle to topple! And from the good to the great, I saw another great moment of non-league comedy unfold as the Foley Meir keeper entered the bar. After pointing out a chap, who I assume he must be pals with, he approached and simply asked, "can I borrow your cap?" before grabbing the sun-visor and heading back out for the second 45. I followed suit and went out just in time for the kick-off and another decent half of end-to-end football.

Newcastle's youngsters started the half well and after the number 9 tested the keeper, both the number 8 and left-winger had a go at getting the equaliser. The goals were still yet to keep on coming and in the 73rd minute a right-hand side cross enticed the Castle defender into flicking the ball past his own goalie to give Foley a two-goal lead with just over quarter of an hour left on the clock. Foley 3-1 Newcastle. In fairness, the reserves didn't give up the ghost and within a minute of conceding they grabbed a second goal of their own. A set-piece this time found its way on to the head of Castle's number 6 and he lifted an arm to celebrate the fifth goal of the game and another lifeline for the visiting side. Foley 3-2 Newcastle. A fourth goal would be enough by now for the hosts and they looked likely to grab it on more than one occasion. In the 80th minute a Meir striker rounded the goalie well, but by the time he'd composed himself to applying the finish, a couple of Newcastle defenders had jogged back on to the line and one of them was in the right place to deny the goal for now. At the other end, Castle went close a couple of times but Foley seemed fairly comfortable after bringing on a fresh left-winger to try and help stretch the visitors on the counter. He did just that in injury time as he burst into the box and won his side a last minute penalty which would allow Mark Grice to step up and confidently boot the last ball of the game into the net and seal the 3 points as the referee ended the game with the final whistle. Foley 4-2 Newcastle. I quickly jogged back to my car and headed on my merry way, knowing that I'd seen a cracking game of football for an almighty price of £0. It does go to show that getting out to a local ground has its charm. Yes, I could've paid a mere £15 to see a good Stoke performance in their 4-0 trouncing of Rochdale, but I was very satisfied with the game I'd seen just a few miles away and with other local clubs like Florence FC, Redgate Clayton and Eastwood Hanley just around the corner, I'll certainly be making the most of the chance to support this division and the sides within the Stoke-on-Trent community. I also really want to go to Abbey Hulton United, who won this division last season, and I'll be no doubt making my Birches Head Road debut soon enough. In the meantime I say goodbye and farewell to Foley Meir, with my only regret being that I didn't find one of the so-called limited edition mugs that I was hoping to purchase to commemorate my first outing to the Staffs County League- if anyone knows how I can get a hold of one of these rare antiques, give me a shout and I'll be glad to make a purchase!
Posted by Daz Knapton at 16:44