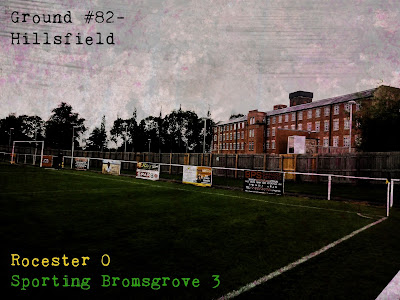 My fourth match in the space of seven days would also prove to be my third FA Cup Qualifier of the season already as I headed out to a local ground in the form of Hillsfield in Rocester. With this being a Replay, following on from the 2-2 draw on Saturday at the Victoria Ground, it would be a good chance for Midland Premier League new boys to prove that they have the calibre to thrive at this level against a side who finished 17th in the division last season. Although this was my first visit to Hillsfield, I had seen Rocester once before in an away 4-0 drubbing to Walsall Wood and I fancied them to bow out of the Cup on this gloomy evening- I made a 1-3 pre-match prediction to the visitors based on their form from last season in both the League and FA Vase.
For those of you who didn't follow the outstanding season of The Rouslers last season, all that you need to know is that they won the League during an unbeaten campaign that saw them drop just 10 points from 38 games. In the FA Vase they had a legendary, albeit unexpected, run going all the way to the Semi-Final and they were just one victory away from a day out at Wembley in the Final. Additionally, the Worcestershire side had the highest average attendance for any club at that level in the 2016/17 season, which ain't half bad for a club that is not even 10 years old! The crowds have been so good of late that when I made plans to visit the Victoria Ground last season for their FA Vase Quarter-Final match against Buckland Athletic, I was denied the chance after seeing last-minute on Twitter that it had sold out before the match- which I had not even considered a possibility at this level. The Romans, on the other hand, have only managed to reach the Last 16 of the Vase on one occasion in their 141 year history- alas, they would not let last season's non-league overachievers get past them without a fight and they'd already proved that in the original bout on Saturday.

As kick-off time edged ever nearer I had a quick whip-round the ground, which is located within just a few meters of the Hogwarts of Construction Machinery- aka the JCB College- and I was unsurprisingly met my some of their advertising boards surrounding the soggy pitch. Shortly after this I popped into the covered seating area, pictured above, ready for kick-off. Unlike a couple of the matches I've been to lately, this one started off well and with just a couple of minutes on the clock it was Robbie Bunn who had the first dig for the visitors, but his close-range effort was tame in the end. Bunn's confident wasn't knocked though and with 5 minutes gone he burst into the box again and then knocked it past Adam Binks in the home team's goal. From my angle it looked like it was heading in, but that didn't stop John Pykett running in and stopping his team mate's strike on the line before knocking it in himself- a very cheeky goal indeed from the right-winger. Rocester 0-1 Sporting. The early signs suggested that this would be a one-sided affair unless Rocester could get back in it sooner rather than later- and they almost did in the 10th minute when Carl Allen vollied off of a corner, but his shot went was well-saved by Reece Francis.

Whereas the Romans looked decent from set-plays, the visitors looked very slick in attack from open play and even against an aggressive Rocester team they made some good chances that could have led to far more goals. Wade Malley in particular was not in-form for this outing and his first one-on-one of the evening led to him scuffing a left-footed chip straight into the Keeper's arms. Just before half-time a second through ball released the Bromsgrove number 10 clean through on goal and yet again he fluffed his lines, meanwhile at the other end the Romans had a close call when three shots in succession just about kept out of the goal. After Ollie Roome hit towards goal from the right, another shot was blocked and then Albert Lansdowne hit wide from 25-yards. That meant we remained at 1-0 with the halfway point, so it was time for a beer and a warm-up in the Clubhouse.
As with the first-half, the second started with a bang too and Sporting were quick off the mark again. Captain Reece Hewitt ran in from the left-wing and enticed his opposition into fouling him for a penalty. Liam Spink, the right-back (of all people!), stepped-up and with nerves of steel he slotted home securely. Rocester 0-2 Sporting. Amongst the rain and break in excitement on the field I took enjoyment from the gents behind me who were obviously something to do with non-league football and they spent the majority of the second-half nattering about the restructuring of the leagues at this level amongst other things. It was interesting, albeit confusing, listening in to the chatter and I was particularly interested by one man's predictions for the Evo-Stik Northern League South. He firmly believes that this year will be Leek Town's year to win the division and he thinks that Kidsgrove Athletic won't be far behind them. I am a fan of both of these sides and would love to see them succeed, so hopefully he'll be right. Back on the field and Chris Lloyd had been introduced from the away side. The substitute winger was here, there and everywhere as he capitalised on the tiring Rocester lads. After rounding what seemed like half of the home defenders and the Keeper, Lloyd's shot was eventually palmed on to the post and out for a corner. As time ran down I received a rare treat from the Board Room as one lass brought out some pork pie- who was I to say no to a free bit of porkie?

Even though the game seemed won by this stage, Hewitt fancied a final goal for his side and as he ran in to the box yet again we was this time taken out by the Rocester number 1 and another penalty was blown for the visitors. Lloyd stood up to finish off a solid substitute showing by thumping home the spot-kick in the 83rd minute. Rocester 0-3 Sporting. That was it for the goals and after the hosts gathered a couple of yellow cards they finally heard the Ref's whistle blow for the final time. This one had probably been my tie of the round, with the weather failing to ruin a feisty, goal-filled match in which both sides had a good go. Rocester will be disappointed to have lost out in what will go down as a heavy defeat, but after winning all of their pre-season matches they must go into the League opener against AFC Wulfrunians with their heads held high. Good luck to both sides for a happy season in the Midland Premier League.
Posted by Daz Knapton at 13:41