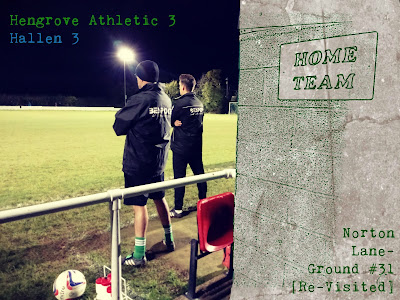 I must start this entry with a pre-warning that not only were Partizan Bristle (aka Tom) 9 goals, 2 red cards, 270 minutes, 1 own goal, 2 sarnies, 17 gentleman's agreements and 3 grounds into a mammoth day, but we were also 2 pints away from the century and therefore in a state of worse for ware- so it goes without saying that a six-goal thriller in our second Western Premier League game of the day was underappreciated and somewhat wasted on our eyes. Thankfully, this was a re-visit for Pint of Football and if you want to check out a more inspired and near enough sober entry you'll be wanting to read my write-up of the Grove's victory against Chard Town at the back end of the 2015-16 season. If you have read my writings from my return to West Clewes and the debuts at Southfields Recreational and the Lew Hill Memorial then stay tuned to find out the answer to the all important questions such as; did Tom and I ever make it back to Shirehampton after the game? and also, did we fulfil the "three pint per ground" limit stupidly agreed at 8am in the morning? I'll be revealing all soon enough!
Despite this venture of GroundhopUk for Non-League Day proving to be about the greater good of supporting your local team and attending regular games at nice grounds such as Norton Lane and the likes, it is important not to forget that amongst the badge stalls, rocketing attendances and fans for the day there was a Western League game about to take place here and with newly promoted Hengrove Athletic taking on the Armadillos in this 7:45pm clash, it would prove to be a great end to the day for all involved. I'd been impressed with then Division One side the Grove last time I'd been in these parts, so I predicted a 2-1 victory for the hosts beforehand.


As previously noted, this is Hengrove's first season back in the top flight of the Western League since they suffered relegation at the end of 2013-14. They came up for just a year from Division One and whilst all of this was going on Hallen had managed to finish 17th every single year until last season where they decided to mix it up a bit and went for 18th place instead. Before the day's action began, Athletic were sitting in 12th with a positive goal difference, 4 points and 4 places above the visitors and with Hallen drawing 3-all last time out I don't think anybody would have been expecting a rinse and repeat affair. With the highest attendance of the day ready to rock and roll, we were soon treated to the first goal of the match and it was the blues cheering as Scott Thomas struck the opener. Hengrove 0-1 Hallen. Tom seemed happy at this and was cheering the visitors on and in fairness the hosts lacklustre start could have led to a drubbing, but thankfully for the Grove they only found themselves two down at half-time. Just before the 30 minute mark Luke Mills finished off a Hallen attack to set them on their way to what would be an expected victory based on the way they'd gone about things so far. Hengrove 0-2 Hallen. Towards the end of the first-half, Tom and I started to work on our escape route out of Hengrove and back to the Shire, but with only pence in our pockets at this stage we knew that it was going to require a big effort. With a 10:45pm bus leaving Hengrove Bus Depot for Temple Meads, we were starting to wonder if it was a feasible plan as we nursed our final pint.


Joking aside, we were in very good company with the Groundhop gang and after having a chat with the day's organiser Chris, we were informed that one of the gang based in the East Midlands was driving home after the game and would not mind dropping us off with our location being literally on his way to the M5. Simon, if you are reading this- you are a true legend! In the meantime half-time had been and gone and we readied ourselves for the final 45 minutes of football and the eighth half of the day, with Hengrove seeming much livelier that before the break. The Grove were soon back in the game and just 10 minutes into the second-half a set-piece found its way into the away goal to half the deficit via Craig White's finish. Hengrove 1-2 Hallen. This strike from the greens clearly rallied the troops and with Hallen getting the game up and running again I felt a sense of optimism that the hosts might just turn things around. The crowd from the EWW Stand shouted out and the side on the pitch responded. Now depending on whose Twitter page you follow may alter your opinion on the goal, with the visiting page describing Rhys Hickery's goal as a "soft one", whilst @HengroveAFC told a tale of the equaliser being "a stunning left footed finish". I myself don't recall it being spectacular but it was indeed a tidy finish to bring the score level after a solid attacking attitude from the Grove. Hengrove 2-2 Hallen. As with many a match I've seen at this level, it is often the case that a side who claws their way back into the game then folds back on themselves and concedes again. Hallen were happy to see this happen and Scott Cousins regained the lead for the visitors. Hengrove 2-3 Hallen.


By this point of the match Tom and I had made our way around to the touchline and I thought I'd offer some coaching advice to the visiting manager as he made his final sub of the day. Willshire brought an attacker off and sent on another defender, to which I shouted out "5-4-1? Goodness me." and the away gaffer approached me to respond with "got no other choice mate". This may have been true enough and after sharing the spoils at 3-3 last time out I can't say I blamed the visitors for trying to shut up shop as we headed into injury time. All was going well until a frustrating handball gifted Athletic the chance to grab a very late equaliser. Just as with the game witnessed just a few hours ago at Odd Down, the last-gasp spot-kick was converted, this time by Jack Fillingham, and that would prove to be the final action of the game. Hengrove 3-3 Hallen. We swiftly departed to meet Simon at his car and were headed back to Shirehampton, knowing that we'd have to suffer a few hours without football before we awoke the next morning for another early start- this time at the Playing Field, home to Shepton Mallet.
Posted by Daz Knapton at 03:07