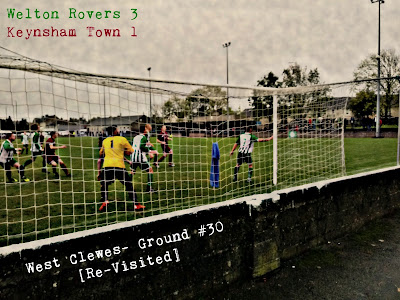 For the third year on the trot, I have been lucky enough to ensure that I could get involved with NON LEAGUE DAY and this time around would prove to be a 4 ground, 15 goal, 12 beer monster-haul of an outing with Partizan Bristle (aka Tom). Starting off with a 6:45am alarm, I awoke in Shirehampton knowing that today was going to be one a great day full of laughs, eventual drunken antics and several gentleman's agreements regarding badges- and so fresh from a slab of toast a quick brew we set off for Weston-super-Mare ready for the half past 8 meet for the minibus that would take 30 or so Groundhoppers off to our first destination in Midsomer Norton, aka my old friends at Welton Rovers.


Last season I spent Non-League Day at Potteries Park, watching a 1-4 away win for Atherton Collieries against Hanley Town, and just like the past two seasons I'm going to enthral you all with some Non-League stats from my 2017/18 Season so far.

Best NL Match
Chester 0-2 Macclesfield Town
Call me biased, but a 0-2 away win on a Bank Holiday Monday is nothing short of splendid.

Worst NL Match
Heanor Town 0-1 Aylestone Park
The magic of The FA Cup can be a highlight of any season, but not in this case.

Most Friendly NL Ground Visited
Sandygate (Hallam)
Not only the world's oldest ground, but a lovely place for a chat with the locals

Loudest NL fans
Sporting Bromsgrove
There hasn't been all that much competition to date this season.

Grounds I want to visit this season
Flamingo Land Stadium (Scarborough Athletic)
Having followed the Seadogs for years, the new ground is certainly one to tick off.
Llanelian Road (Colwyn Bay)
Maybe I just want to take a visit to the seaside?
St Mary's Park (St Cuthbert Wanderers)
My Uncle Roy lives across the road from this Scottish Non-League Ground.

We made it to North Somerset with time to spare before the 10:45am game and so decided to re-familiarise myself with the ground that I'd visited at the back end of the 2015/16 season, when the Green Army were still just about a Western Premier League side. Since then the hosts for today have had a pretty poor season in 2016/17 and they finished 20th out of 22 sides in their Division One campaign, a whole 44 points below their opposition Keynsham Town. Before the start of play Welton Rovers were in a very mid-table place of 12th, albeit only 4 points off 2nd place Bristol Telephones and indeed their 4th place opposition. Keynsham, known as the K's, had managed back-to-back 4-2 and 5-2 victories against Devizes Town and Sherborne Town respectively so with that in mind I predicted a 2-1 victory for the visitors, despite being firmly a Welton fan for the day. Donning my Green Army scarf, Tom and I popped into the clubhouse for a brew and a bacon butty, before having a good natter with Tom's pal and Gashead Goliath Terry- who often visits West Clewes and in fact was there when I made my first outing.

As I'd recalled from last year, West Clewes is a good ground for this level and has a good mix of standing and seating areas to take in the match from. There is a Western League trademark kid's play-park within the grounds and with a couple of hundred fans ready for the rainy Saturday morning fixture, the couple of small stands towards the half-way line were crammed full of folk wanting to stay dry. Safe to assume that we weren't to be put off by the weather and as the teams came out we stood across from the stands ready to get the first of 360 minutes of football for the day. As the match kicked-off the sense of excitement heightened and from the off we were treated to a real game of end-to-end football. Just four minutes had passed when Matt Curnock wriggled through the Welton defence to put the K's ahead in the early proceedings of the game. Welton 0-1 Keynsham. Seeming to have hit snooze on the old alarm clocks, the host needed to wake up and they looked eager to respond with Francois Allen looking hungry up top and Shak Green causing a ruckus on the wing. Keynsham's keeper Dunk made a decent stop from a 9th minute header and at the other end it seemed that Tom Drewitt was feeling the heat from his manager- the Welton keeper screamed out at his gaffer as he was instructed to "get there" ahead of Town attackers.
With Groundhoppers flocking from Mansfield, Derbyshire, the North East and everywhere in-between, this finely-organised GroundhopUK weekend was so far proving to be very popular and even Non-League junkie Tony Incenzo couldn't resist popping over to the town most famous for inspiring the location for Midsomer Murders. With half an hour approaching on the field, we were to be treated to a second goal of the game and it would this time come from the home side. Green tore down the centre of the field elegantly before releasing Allen, who chipped Dunk expertly. Although the K's defender cleared this effort, a corner was conceded and the in-swinging corner was met by a free header for Captain Tom Smith. Welton 1-1 Keynsham. So far the standard of the match had been very good and the continuation of happy memories at this ground would not subside any time soon- and just before half-time we'd see a third goal. Chris Pile, who'd put in a couple of tempting balls into the box already, cut in on the left before whipping in a cross-cum-shot that found its way over Dunk's head and into the net. Welton 2-1 Keynsham. It could have been worst too for the out of character visiting side as the Keynsham Captain almost headed past his own keeper deep into stoppage-time of the first-half.

The second-half maintained a good standard and although some of Joe Battrick's passing could have been described as shaky and threatened to land his side in hot water, on the whole Welton looked in control. At one end we saw Smith unfortunately bundle into his own team-mate in the box that could have otherwise seen a chance for a third, meanwhile the visitors went close through Brown on the break. In the 84th minute Keynsham hit the bar with a long-range curler and the tension (or beer) was proving too much for Tom who popped off to the toilet just in time to miss the final goal of the morning. Pile found himself open on the left-wing yet again and this time he scored a goal that he definitely meant as he side-footed a tidy strike past the away keeper and that would breathe a huge sigh of relief for the hosts. Welton 3-1 Keynsham.

The game soon came to a close after the decisive third and we piled into the bus for the 2.1 mile short-drive over to Radstock Town, ready for my first experience of the Southfields Recreational Ground as Old Abbotonians were in town.
Posted by Daz Knapton at 03:55