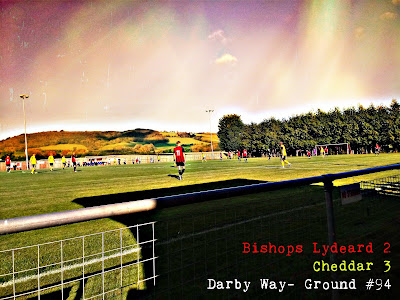 So here we are, the big finale of the Western League Groundhop 2017. The seventh and last game of a mammoth weekend would all come down to the gorgeous setting of Darby Way for a 2:15pm Kick-Off between Bishops Lydeard and Cheddar. It is true that any Western League ground can look like a work of art in the right light and with temperatures rising quicker than the Quantock Hills surrounding us, this October afternoon would be the perfect way for Partizan Bristle (aka Tom) and I to tick off our 63rd and 94th grounds respectively. We had so far visited the Lancer Scott Stadium for a 2-1 Ashton & Backwell victory over Bishop Sutton that seemed like months ago at this stage, before a Saturday four-game haul starting at West Clewes for old favourites Welton Rovers taking on Keynsham Town, followed by a short drive to Southfields Recreational for Radstock Town versus Oldland Abbotonians, then on to the Lew Hill Memorial for to see Odd Down and Bitton share the spoils in the first of two draws that day. The Saturday ended with a 6-goal mega-match in the moonlit setting of Norton Lane as Hengrove fought back against Hallen and then of course we started off Sunday with a morning match at Shepton Mallet's Playing Field ground as we witnessed a very good home side take down Brislington. Surely we didn't deserve another classic to end it all?

As with the previous six outings, Tom and I made our pre-match predictions and with the sides sitting in 13th and 14th in the table it was bound to be a close call. Last season the Cheesemen lost 2-4 home match to the Bishops, before heading to Darby Way to take a 2-3 victory in the return fixture. Assuming this one would be goal-heavy too, both of us plugged for a 3-2 prediction- I went for a hosts win, after seeing they'd won three on the spin prior to this game, whereas Tom correctly backed the away side. Personally, I couldn't bring myself to fancy a side whose badge used to be a cheese-version of Spongebob Squarepants.

True enough I was taken aback by this one. Upon entry into the ground from the corner, there were wonderfully blue skies lining the peaks of the conifers at one end and to the left of that was a lining of wooden fencing that sat in front of the peaks of hills and fields as far as the eye could see. Nearby, I was surrounded by a mass of people who'd come out to feel the Indian Summer heat and of course try out the delightful selection of pre-match grub over by the clubhouse. With the smell of curry in the nostrils and the mid-afternoon hankering for a beer, we made a beeline for the queue for a burger and despite the temptation of a big pan of curry trying to lure us in, we opted for the classic footy combo of beef and bread. At this time the lads piled on to the field and with kick-off once again looming we grabbed a seat in the glistening Main Stand ready to sit back and soak in the delights of the Bishops against the Cheesemen. In the early knockings, Tom had declared his delight at the way Cheddar's Maggs was playing- the number 11 looked very confident on the left-wing and with 8 minutes gone he was poised to gain the first assist of the game. Running right before us, Maggs switched the ball with an almighty lofted pass over to the on-rushing Coombs, who collected the ball and ran in on goal, before hitting a perfectly-placed strike from just outside the box. Bishops 1-0 Cheddar.

Sam King for Cheddar had a chance to double his side's lead but his 15th minute header was glanced wide. Compared to some of the matches we'd seen, this one was more of a football match than a brawl and when an eventual crunch tackle did come sliding in it caught everyone by surprise. As one lady shrieked out "he got the ball", a calm younger chap called over to her in response, "yeah, he may have got the ball though as well". The fans from the new looking red and black seated stand were soon on the edge of their seats again as this time Adam Jones for the visitors went close. With 28 minutes on the clock, Jones struck into what looked like an empty net before the flying Bishops keeper regained his composure to tip the claw the ball out for a corner. According to Rovers fan Terry, recently witnessed trying to get a selfie with Tony Incenzo at West Clewes, the ball was going over anyway. Things went from bad to worse for the ever defensive hosts as a bad bit of Goalkeeper distribution led to King having an open goal. Much to the amazement of everyone in attendance, the ball sailed past the goal in one of those moments where I genuinely think I would have scored. King then later had a one-on-one shot saved well and at the other end the Lydeard lads made their opponents squirm at the missed chances. First off, a quick break from Jake Quick was eventually tapped home by Ben Hebditch to equalise in the 38th minute. Bishops 1-1 Cheddar. Soon after this and just before the break, the hosts had completed a dramatic turnaround and through a mass of yellow shirts it was Hebditch again who somehow managed to tuck the ball away for his second in 5 minutes. Bishops 2-1 Cheddar. I promised I wouldn't come out with any cheesy puns, but I can't help describing Cheddar as a crumbly mess as the Ref blew for half-time.

The second 45 got off to a pretty decent start too and Cheddar started on the front-foot again despite being behind from the break. With King missing another strike at goal, the hosts also cleared a corner off the line and I was starting to believe that if they grabbed another goal on the counter they would be home and dry. 50 minutes passed and the Bishops got their chance as a penalty was given to the home side- this was just what they needed after being under the cosh. Jake Quick stepped up and unfortunately could only strike a post from 12-yards.

At the other end, Cheddar began to celebrate an equaliser as Jones headed home- but this time the lino raised his flag to ensure that the party was put on hold. Cheddar must have been starting to think they were out of luck, but sometimes luck can only play a small part in the game and Jones certainly showed that he had more than just a bit of fortune in his locker. In a moment of pure technique and class,the visiting frontman pelted one hell of a volley into the goal on the 65th minute. Bishops 2-2 Cheddar. The last 20 minutes were perfectly set by now and we were both cheering on our respected pre-match predictions to see if anyone could finish the trip with a correct guess. We walked back around to the stand to take a seat and we were just in time to catch the winner. Midfield stalwart Ricky Bennett grabbed the game by the scruff of the neck in the 74th minute, as he stormed forward like a Western League Iniesta straight into the box almost unopposed, before taking a moment to look up, pick his point and slot home a succulent finish. Bishops 2-3 Cheddar. This 28th goal of the day summed up a very good game of football that in truth should have been a much bigger win, but on a bad day could also have turned into a defeat had the spot kick been converted. The match counted down and as Maggs hit the side-netting when he should have scored from a tight angle, Jones also failed to double his tally for the day as the fans gasped yet again at a missed chance to extend the lead.

After 630 minutes of football including 28 goals, red cards, an own goal, a missed penalty, last minute equalisers and many glaring misses, Tom and I left Somerset headed for my abandoned car in Weston-Super-Mare and an eventual ride for me back to Stoke and back to the reality of our seemingly endless weekend of football coming to a close. For me, I'd have to say that my favourite match was the well-fought affair in this final game and on reflection, my favourite ground of the weekend had to be West Clewes. The Playing Field was a great one too and also had one heck of a showing from the Mallets, so overall I'd crown that the creme de la groundhop. I will undoubtedly be back for more Western League madness next season, but until then it'll be Partizan's turn to come to my neck of the woods and I intend to take him to one of my all time favourite non-league grounds- The Aspray Arena, home of Sporting Khalsa. Look out for both of our entries from that one, and before that I'm hoping to get down to another Essex Senior League match and I might even make the trip to Leigh Sports Village on Halloween for Man United versus Benfica in the U19 Champions League.
Posted by Daz Knapton at 14:56