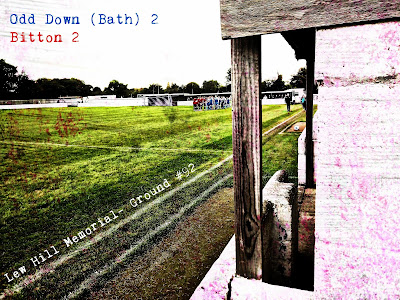 With half a dozen pints settling in my stomach from the previous two outings of the day at West Clewes and Southfields Recreational Ground, this third trip to Bath in search of Odd Down's 4:30pm match against Bitton would prove to be our first Western Premier League fixture of the GroundhopUK weekend- and after the last game I was hoping to see a slightly improved match that could hopefully hold a candle to the opening bout of the day. I had been pre-warned by Partizan Bristle (aka Tom) that this ground, despite being in close proximity to one of his favourites in the form of Twerton Park, was a somewhat rundown facility and did not sit in the same category of luxurious grounds that I'd come across so far over the years at this level. To perhaps factually and politically correctly define what he means, I must refer back to the 2015-16 season where Odd Down won the Premier League ahead of Devonshire outfit Barnstaple Town, but due to failing to meet the requirements to leap into the dizzy heights of the Southern League they ended up sticking around. Now to put it in the form of a picture to prove why we may not be seeing the Lew Hill Memorial Ground climb any higher, I present you with the below.

This, however, has never been enough to deter me from a visit to any ground, stadium or even field with a couple of goals, so I remained excited for the game and rather hungry for some pastry goodness. Being from the north, where you cannot go to a ground without having a plethora of pies to chose from, I was largely disappointed so far by the lack of gravy on display today and with a hankering for some scran I made a very direct route toward the butty hut in search of sustenance. A sausage roll and a ham bap went down delightfully, meaning that we could recharge, rebeer and get ready for more fun and frivolity at Odd Down's spacious Clubhouse.

With a stage to the right-hand side, a pool table near the door and a large bar joining on to the food shack, the club offered up a very workingman's feel to it and we were willing to test out all of its facilities. Tom gave his best rendition of the Paul Pogba Monologues and in return I demolished him at pool, leaving us with just enough time to top up our plastic cups and head outside to a cloudy pitch-side. Whereas there was no competition on the pool table, the football field was bound to provide a tasty rivalry this afternoon as the hosts sat in 9th and their visitors 11th, just 1 point behind the Down. With a close match expected, I made a pre-match prediction of 1-1 but knowing that Bitton had a fairly poor goal difference for this part of the table, I could have also guessed that the hosts may end up with a victory if they play their cards right.

Tom and I took up position next to the visiting sub bench and just a few minutes in we were pondering whether or not Dan Langdon was a player/manager or just a frustrated outfield player. With the constant need to stretch and appear to warm-up, we were half-expecting to see the Bitton boss head on out to show them how it's done. The match had started at a decent tempo but also had a fair bit of bite to it as well- Bitton had the best of the early play but with some crunching slide tackles flying in we already got the sense of a better game than we were privy to just a few hours prior. "That's assault on the street, referee!" shouted one of the lads on the Ton bench as he saw one of his lads in red tumble to the ground.

By this stage the Down had turned the tide in their favour, going close just before the half-hour mark as a shot is well saved from an attack on the left-wing. This proved to be just a practice effort for the hosts and just moments later we would see Kane Simpson eventually score a goal as he tapped in his own rebound. Odd Down 1-0 Bitton. The game went from sweet to sour shortly after for Odd Down and soon after their first goal of the day they saw Dave Gould receive a straight red for a hefty tackle. My view is that it probably wasn't bad enough to warrant a sending off, alas Gould was on his way and the break in play provided a slightly humorous moment as Kyle Tooze for the away side changed his boots- he must've meant business. Bitton looked to capitalise on their new-found advantage and McClennan had a decent shot on target just before half-time. At the other end, Odd Down had weirdly seemed to improve despite being a man down and as the club's all-time top scorer Kye Simpson almost got a second, the half-time whistle saw the first 45 end with the hosts just about on top.


With the game being pretty full-on, we hadn't had our usual dull spell to go and check out the ground properly, but in truth there wasn't all that much to see. With one stone-built stand behind the goal and a rickety fixture opposing the technical area, the Lew Hill Memorial is basic at best. The second-half soon got underway and so we decided that we'd head to behind the goal of the hosts as we now expected to see the ball facing this way for the second-half. The hour-mark soon drew close and we'd see Referee Brian Channing go under the spotlight again as he blew the whistle after a challenge in the Odd Down box. Tooze, who was showing the attacking pedigree of a young Cafu in his new sparkly boots, was the man who went down for Bitton and when he eventually arose from the Ref's whistle he was shocked to see Mr. Channing looking at him as he drew out a yellow card, followed by the red for an apparent dive. If the first dismissal seemed harsh, this one certainly was one to get the blood pumping and although it didn't look to be a penalty, I'd say the challenge was fair from the Down defender too- but what do I know?


The match was now 10 v 10 and with only just over 20 minutes left there was still tonnes of action to come. Tom spent a few seconds watching a crow that he'd confused for the ball, so hopefully when he reads this it will be a reminder of what a great close to the match we were about to witness. Tom Knighton slid the equaliser in and it was game on! Odd Down 1-1 Bitton. The Bath side seemed to have crumbled worse than parts of their ground at this stage and in the 78th minute Knighton hit the post- reacting quickest to this was McClennan and the winger struck home a deserved second for the visitors and a potential winner at this stage. Odd Down 1-2 Bitton. As we joked that Odd Down has "Bitton off more than they could chew", the hosts roared again and with all credit to the Down they woke up just at the crucial time. In the 87th minute a penalty was gained for the side in blue and up stepped Asa White to equalise the score and earn his side a point. Odd Down 2-2 Bitton.


With an hour or so until the final match of the Saturday, the minibus powered up again and we would be ready for our last trip with the GroundhopUK gang. Next stop- Hengrove Athletic!
Posted by Daz Knapton at 03:07