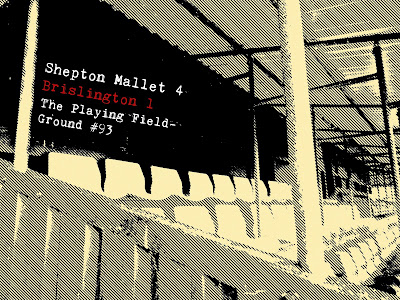 Rife with a hangover and a need for toast, I awoke on the Sunday morning of the Western League Groundhop having spent the past 38 hours or so engrossed in five football matches that started in the moonlit hours of Friday night at Ashton & Backwell. Following that trip to the Lancer Scott Stadium, my 90th ground, Partizan Bristle (aka Tom) and I awoke early to join GroundhopUK and the gang for a day of mission on a minibus to seek out four more games. Following a perfect start to the day at West Clewes, we then proceeded to make the short-trip across Radstock to the Southfields Recreational, before a mid-afternoon jaunt to Bath where we saw Odd Down and Bitton play out a draw and as if that wasn't enough, we completed our Non-League Day delights with my return to Norton Lane for a 6-goal epic. Today's two game haul would seem a mere walk in the Somerset park as we encountered the Playing Field and a finale match at Darby Way.


For some reason or other, we had made a rookie mistake to start the day by thinking the opener was an 11am kick-off and it was not until checking the factual database of Twitter that we realised that in fact it was a 10:45am start. With this in mind, we piled into Tom's old Suzuki Alto and began the 30-mile drive down Old Bristol Road in the heart of Somerset. On the travel we listened to some oddly catchy world music from Tom's MP3 player and as I began to feel slightly less like I'd been hit in the head with a literal mallet, I used the drive to have a glance at my programme to get a grip on how the two teams had got on so far in the Western Premier. Shepton had made a very promising start to their campaign, sitting pretty in 5th before the weekend's action and despite a midweek defeat at Bridport they still only found themselves 6 points off the top-spot with 11 played. Brislington on the other hand had only won 3 matches, with a 1-6 home defeat the previous weekend proving to be the low point for the side that finished 10th last season. With this in mind, Tom and I cast our usual pre-match predictions and after Tom correctly guessed the 2-1 win for Ashton on Friday, I am delighted to announce that on the 6th time of asking I managed to make a correct guess of 4-1 to the hosts.


Arriving just after 11am, it appeared that the gigantic roar from within the Playing Field was an inevitable missed goal- the most sickening thing a football fan can experience. We quickly entered the fray as if there would be a chance to catch the backside of the replay on the big screen, but sadly we were informed upon entry that the match had already witnessed not one, but two goals. Shepton 2-0 Brislington. With 20 minutes missed, we got our priorities in order and quickly grabbed a cuppa before making the way to pitch-side. My first thought of the Playing Field was that is that typical ground that looks magnificent in the sun, but I imagine on a dull or dark game would stand-up as being bang average. Thankfully this Sunday morning was stunning and with the gargantuan conifers mounting the ground, I felt like I was at a footballing haven here at Shepton Mallet. On the pitch all was going their way too and despite the verbal toxic being splurged on the pitch, the football from the hosts was as good as I'd seen all weekend. One man to the side of us, who seemed slightly insane, continues to commentate to himself and express a major level of discomfort when Shepton failed to score a third just before the break.

Amazingly for this time of year, there was some genuine heat coming off of the sun on this morning and knowing that a mooch over to Bishops Lydeard was still to come, today was going to be a great one. The sides soon came back out for the second-half and within a few minutes the Mallet had increased their lead. A very nice move saw the hosts centre-back eventually ping a beautiful direct ball into the danger zone and the Shepton attacker headed home the third. Shepton 3-0 Brislington.

Just before the hour-mark Brislington started to look something like a football team and George Jones was given a chance after some good build-up by the visitors. The eventual strike was dreadfully high in the end and with time running out it was a big miss at this point in proceedings. At the other end Tom Pawley had come into the match and he was clearly out to impress- strangely annoyed with himself, Pawley shouted "FUCK OFF!" as he crossed a ball in from the left and that was inch perfect and nodded wide. As the game came to a close I got chatting with one of Tom's fellow Bristol Rovers fans Jack about the OCD that comes in football fans when it comes to kit numbers. Mallet had their number 9 at the back and number 5 was the striker. Even writing about it a week later boils my blood slightly.

In what was now the final 5 minutes of the match, Brislington went forward again and Danny Hunt was on-hand this time to grab a consolation tap-in for the travelling supporters and Groundhoppers alike. Shepton 3-1 Brislington. This tame goal clearly annoyed the home-side who had looked hopeful of seeing out a clean sheet to the end, however the disappointment of conceding did not fester long in the minds of the black and white shirted side. Just before the Ref confirmed the injury time, the goal of the weekend so far was hit home by James Billing aka Shepton's Captain Spectacular. Some slick build-up play again involved a lot of the home side's team and when an eventually delightful dink was fed through to the striker he powerfully spanked it home. Shepton 4-1 Brislington.

The match soon saw itself out and the most comprehensive victory of the Western League weekend would go to a very impressive Shepton Mallet side. It is not always in my nature to be so positive about a footballing experience, but just like the next game at Darby Way this one was a very enjoyable experience. There were plenty of goals, including a delightful strike to top it off, as well as perfect weather and a scenic ground that I'd be more than happy to revisit. We quickly departed the Playing Field and headed deep into the western region of Somerset in search of a seventh match within 48 hours at Bishops Lydeard. Blog entry to follow for that one later on, but cheers again to Shepton and Brislington for a great game.
Posted by Daz Knapton at 15:49